Disclosure: my interests in cocktails tend to be heavily biased toward the 19th Century.

So, last year Stephan Berg and co. trotted out their Bogart’s Bitters product: 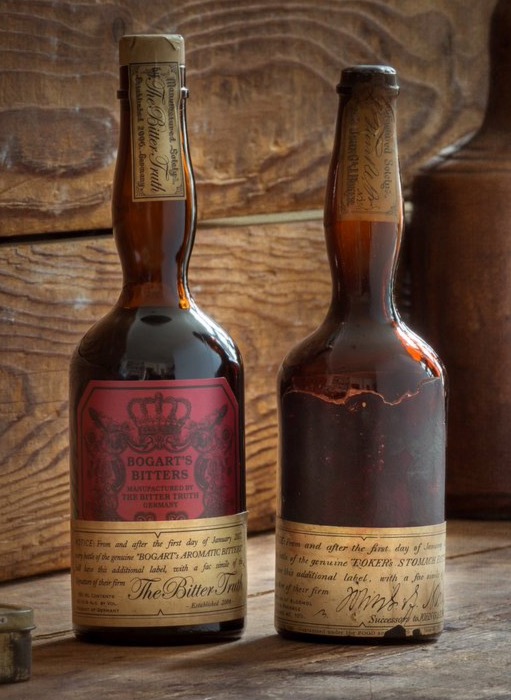 They made much of its ostensible authenticity and accuracy as a reproduction of Boker’s Bitters, but I see two intractable problems with that:

Here’s what I can grant:

When I say Bogart’s performs, I have in mind something specific that I can only write about in a vague, roundabout manner. When I got into cocktails in the 1990s, there was Angostura, and if you worked hard, you could get Peychaud’s. If you traveled to Japan and knew the right people at Suntory, you could score some Hermes orange bitters. That was it. Eventually, Dr. Cocktail got Fee’s into the cocktail bitters business, and Gary Regan got Sazerac Co to collaborate on an orange bitters, and then the flood began and we’ve now got dozens upon dozens of “bitters” on the market. In my opinion, almost none of them are bitters; rather, most are flavor drops and entirely novel. Yes, real bitters are bitter, and yes, they contribute flavor and character, but they also function as a sort of flavor binder for the other ingredients in the drink. I do not understand how this works, and clearly most people out there making “bitters” don’t understand, either. (I’m not even convinced Stephan Berg and co. understand.) My suspicion is that only certain botanicals can deliver the binding effect, much in the way that “vermouth” made without wormwood seems to cease performing as vermouth.

Well, Angostura is the absolute benchmark for this “flavor binding” performance. Peychaud’s is not as good at it, but clearly possesses an essential role or three. In my opinion, Bogart’s is at least decent at flavor binding, and it provides a viable drop-in alternative to Angostura. Whether or not Bogart’s is an accurate reproduction of Boker’s, it works fantastically well in the 19th Century cocktails that call for Boker’s. Beyond that, sometimes it’s really nice to be able to get away from the Caribbean flavors of Angostura. (I’d say Bogart’s has more in common with the Fernet Branca flavor profile.)

Put some of this Bogart’s in a Gin Cocktail with Old Duff Pure Malt Wine Genever, and I’m in heaven.

Caveat: In addition to their lower concentration, Bogart’s contains an enormous quantity of coloring. I’m not sure why. This stuff will darken your drink, for better or worse.

The effort and detail put into the packaging alone—that bottle~!—is promising. How would you compare them to Dr. Adam’s take?

I have a bottle of Adam’s Bokers and, alas, I find it pretty useless. I’ve tried it over and over in all the drinks it’s supposed to work in, and it’s bitter, but that’s about it. That’s my experience.

One thing I can guarantee you is that the two products have virtually nothing in common (other than perhaps some ill will).

After months of fruitless hunting in the wilds of West LA, I finally broke down and ordered a bottle online.

Jiminy crickets is it good. It’s given my Old Fashioned new polish, but it positively glows in a Manhattan.

Can’t wait to see how performs in other classics.