Much as we have discussed essential figures and the canon, here’s a list-in-progress of the mixed drinks that either formed the basis for the American Bar, or are, for better or worse, its best-known accomplishments. Some of my dates are probably wrong, or are attempts to fudge a messy situation—I can easily be nudged in most any direction to refine and improve the list.

(all Imbibe page references below are to the Second Edition)

Interesting to compare to the IBA list. I suppose one could argue that pretty much everything on the IBA list should be on the above list for the same reasons the IBA included them.

Great and important topic - thanks Martin!
Don’t you think it would be useful to mention the source for each drink also ?
With a way/code to precise if the recipe dated is for :

I agree some documentation would help, and I’ll start adding some.

That said, I didn’t set out with this particular list to try to nail down attributions or “firsts”—I was more looking at this from the broader cultural level

I understand for the cultural level, but with time, if we can end with a reference page, it would be useful to many

I think we’re gradually working our way towards that on various fronts.

I’ve completed my first pass of attributions and citations.

I added a few things. I don’t have the original 1935 Smirnoff bottle-hanger with the Vodka Martini, but I do have this ad from the Chicago Tribune, March 15th, that is apparently based on it: 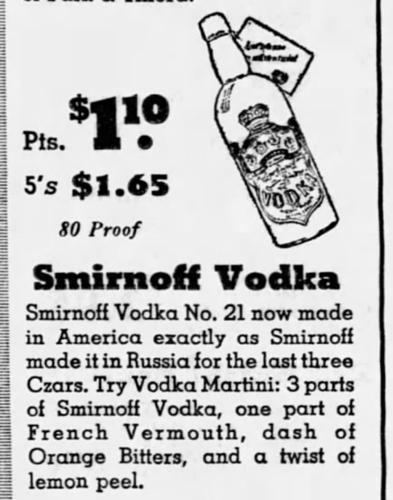 You can see the hanger in the picture. So close yet so far away.

Edited the Sidecar to reflect Robert Vermeire’s contribution. His book was published in the spring of 1922, MacElhone’s came towards Christmas. Hope that’s fine with everybody.

Any other Europeans or European drinks I’ve maybe given short shrift?

I might add the “Combinacion” of Madrid, the Rose (Paris) and the Ohio (Berlin).

I’ll leave the Combinacion to François, but for the others:

The Ohio is tough because there’s a French version that is early but completely outside the mainstream tradition of what the cocktail was. Maybe Robert has a better idea–I recall he wrote something on this recently–but the last time I dug into it, for the Whisky Advocate, I couldn’t find a creator for it; the best early source I could find is Schoenfeld & Leybold, 1913. The drink was certainly current in Germany through the 1960s.

Thank you for the ongoing additions and corrections—I’ve updated the list accordingly.

@francois, how do you feel about adding the Media Combinación to the list? Makes sense? Is there any identifiable provenance?

Aperol Spritz: I don’t have any great sources—mainly Wikipedia—but it seems the Aperol variant of the Spritz Veneziano has been kicking around (regional specialty) since the 1950s.

If so, that currently leaves the Appletini of the mid-90s as the most recent “essential” drink on the list. That seems a little sad and unfair, but maybe them’s the breaks? Just to be sure, what about Tommy’s Margarita, Gold Rush, Gin Gin Mule, Old Cuban, Chartreuse Swizzle, Penicillin, Oaxaca Old Fashioned, Paper Plane, Benton’s Old Fashioned, Gin Basil Smash or the Barrel Aged Negroni? They’ve certainly traveled. Perhaps it’s just too early to name any drinks from the last twenty years as essential?

A post was split to a new topic: Combinación