I have been remiss in documenting changes and updates to Total Tiki Online, but the last couple months have been seriously intense leading up to and into our soft-launch.

I’m pleased to report there have been few major problems. One continues to irritate, as of this writing, but I will detail that in a separate thread. A few of our customers have already helped us track down and fix some run-of-the-mill bugs. Many thanks to them!

In summary, since the launch, there have been many small updates to the software side of the site, but the big ones are:

I will try to keep a log of additional updates appended below this one.

Oh boy… of course I forgot, we did add a rather major feature to TTOL a few weeks ago: multiple inventories.

You can now maintain up to three separate ingredient inventories plus a forth (under testing, coming soon) for sync with the Total Tiki app for iPhone and iPad.

This is a big deal for those with multiple homes, but it’s also a boon for event planning.

Only one inventory can be active at a time, and you can switch between them in the Preferences form. We recommend giving each a nickname so you don’t get confused about which inventory is active (the nickname will appear in various places around the site to remind you which context you’re in). 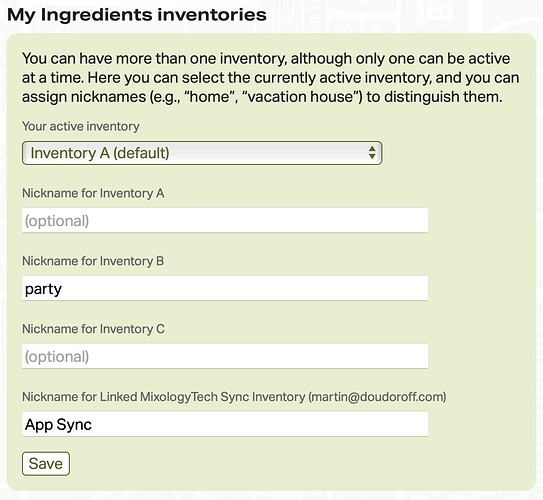 We’ve continued to roll out new content, mostly in the form of vintage imagery from Beachbum Berry’s collection.

We’re going to stop calling it “early access” since the site has actually been quite stable.

The biggest new feature, recently, has been sync middleware so that those with the Total Tiki app for iPhone and iPad can enjoy synchronization of their inventory, lists and notes between the app and Total Tiki Online. See here for more information.

At the moment, we’re tinkering with session invalidation timeouts in attempt to reduce how often you must log in. (Annoyance factor.)