John deBary recently authored an entertaining bit on blue curaçao and his (quite good) PDT drink, the Shark for Punch. Along the way, the Laraha—the transplanted form of the Seville orange on Curaçao (the island)—and Senior & Co. crop up for the umpteenth time.

I have nothing against Senior & Co.’s curaçao. It seems to be a functional, unexceptional liqueur, priced reasonably (always an important consideration). I am (apparently) irritated that Senior’s long-running efforts to claim special authenticity (“The Genuine Curaçao Liqueur”… “Senior’s Authentic Curaçao Liqueur”), by virtue of being a Curaçao-based operation and ostensibly employing some locally grown fruit, continue to be taken seriously. If you grant Senior’s earliest corporate mythology, they have roots in 1896, but the actual company dates to 1945. Curaçao liqueur is much much older than that, it seems unlikely that much curaçao liqueur was ever derived from actual Laraha oranges from the dinky Curaçao colony, and if there’s anything particularly remarkable and distinctive about what Larahas exist for harvest, I have never been able to identify it in Senior’s product (as opposed to anyone else’s curaçao).

Am I missing something, here?

I’m still quite curious what the curaçao of the early 19th Century was actually like. I imagine something as rudimentary as a liqueur could be: orange essence extracted in whatever alcohol (with or without distillation), diluted and heavily sweetened. Perhaps I am underestimating the marketplace of the time? Is there still a Dutch product that is believed to be un-modernized?

I also recall there was a muffled kerfuffle some years ago when Combier’s Liqueur d’Orange was (re?)launched in the US market over who “invented” triple sec curaçao—a 19th Century French elaboration on the 17th Century (?) Dutch curaçao liqueur: supposedly more intense, more refined, and less cloying (debatable). Combier still claims outright to have done so in 1834. Perhaps so. Cointreau introduced their Curaçao Blanc Triple Sec in 1875, and as far as I can tell, it pretty much immediately became the market leader and utterly dominated the market even after Cointreau dropped “curaçao” and “triple sec” from the label. An impressive showing. The only bottled product called by name more frequently in the literature is Angostura Bitters (although Campari is climbing fast). Aside: the first mention of triple sec I know of in a drink recipe is William Schmidt’s (1891) Sans Souci, and it is but a dash. Things seem to pick up for triple sec in the early 20th Century, but they’re specifically calling for Cointreau, more often than not.

I’ve never thought there was much behind Combier’s claim. However, another distiller, called Saintoin, advertises a triple sec liqueur almost ten years before Cointreau’s supposed invention. It’s described as lighter and more delicate than traditional curaçao.

A 1895 biography of Edouard Cointreau, published in a biographical dictionary of France’s greatest industrial figures, had this to say about the ‘invention’ of triple sec: 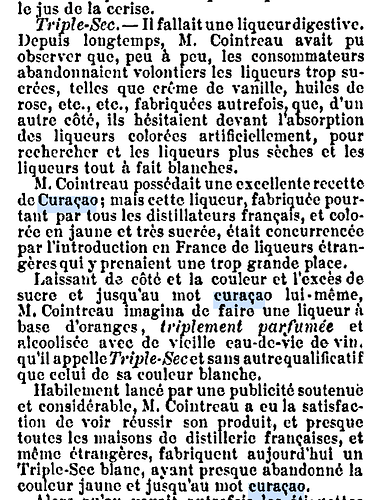 It was a reaction against artificially coloured and heavily sweetened curaçao liqueur. This had to be light, “triply perfumed” and white.

This seems to generally support the angle that what became known as “triple sec” was an attempt by (various) experienced French confectioners to apply their more sophisticated processes and aesthetics to a venerable, but simpler/cruder liqueur.

Looks like it. Meanwhile, others (Louis-Alexandre Marnier-Lapostolle) took a different route: premiumize curaçao.

But we have two friends here who extensively researched the subject. Wondrich, of course, but also Fernando Castellon, who did a lot of work with Cointreau. Maybe they can chime in.

I’ve got Santoin as the earliest marketer of triple sec I can find as well, from 1867. But “triple” liqueurs go back to the early 19th century. In the 1837 edition of the Encyclopedie du gens du monde, the article on distillation says “Should one wish them to be perfect, one must pass the same distillate several times over new botanicals; this makes for what are known as ‘double’ spirits, ‘triple’ spirits, etcc.” (unfortunately all I have handy is my old translation; I’ll try to dig up the original quote). In otheer words, Martin is correct about new processes/old liquors. The way orange triple liqueurs were made later in the century (as I pieced it together a while back from various manuals for distiller-liquoristes) was with a first distillation with the peels, then a second distillation of the alcohol-soaked peels by themselves (basically, steaming the alcohol off the peels), and then by blending those two distillations and either infusing them with fresh orange peels or blending them with an orange peel-neutral spirit infusion (Grand Marnier came about when the Cafe Royal in London commissioned Louis-Alexandre Marnier & c. to make such a curacao, but with the neutral spirit for the final infusion replaced with aged cognac from the Cafe’s cellar).

The “sec” part of “triple sec” is also a little puzzling, as many of thee old formulae use as much sugar as in regular curaacao. The thing that appears to have made them seem less “sucrée” was that they had more bitterness from the higher extraction from the peels. You see this in Leon Arnou’s 1905 Manuel du Confiseur et Liquoriste, where he says that triple sec is “a little stronger in alcohol [than regular curacao]; slightly bitter from the added infusion of peel.”

But every manufacturer seems to have had their own process, within limits. Is it possible that Cointreau made the first white triple sec? Sure. Maybe they rectified or redistilled the final infusion, making for a clear product. But here’s a Cointreau ad from 1879: