This mini has been kicking around the back of a shelf for years, so @slkinsey and I busted it open last night. 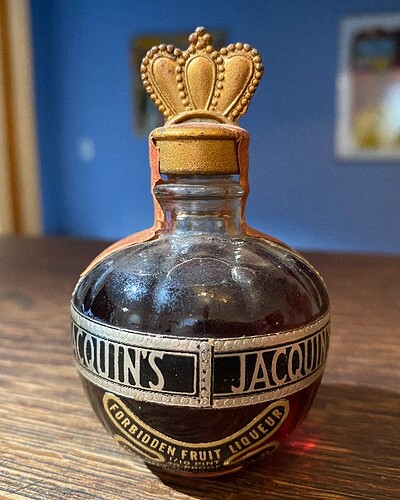 We did get the sense that whatever it began as had oxidized somewhat: there was not much citrus present in the nose or taste, and we sensed some sherry-like characteristics. Plenty of alcohol was present—the bottle said 70 proof, and I doubt it was any lower than that. It’s hard to say exactly what it tasted like. Prune brandy liqueur? That makes it sound worse and more specific than it was, though. Also interesting is that it was a drier liqueur than we expected—more triple sec than curaçao, and perhaps even less sweetness than that.

We wrung two miniature cocktails out of the sample: a Gift of the Gods (equal parts dry gin, dry vermouth and Forbidden Fruit) from Tarling, and the Tantalus Cocktail (equal parts Forbidden Fruit, brandy and lemon juice) from McElhone. The former was more the successful drink, and it even unraveled a bit more citrus character from the liqueur, but alas, there was overall nothing to get excited about, here. Oh well.

Interesting experiment. Those dives in dusties, and cocktails made with them, rarely pay off in terms of flavor or revelation, but the journey is always fun.

Way back in the early noughts, Forbidden Fruit was one of those white whales, largely, I think, due to Dr. Cocktail. When Rob Cooper got (ostensible) Crème Yvette back on the market, I remember he said he was looking into bringing back Forbidden Fruit, too, but noted that it was not likely to be profitable.

We may never know, and maybe that’s ok.

the resemblance to the Chambord botttle is striking and really dates the time when it was produced.

Oh, it is the Chambord bottle, or rather, Jacquin discontinued Forbidden Fruit and recycled the packaging for Chambord, which was vastly more profitable.