To kick things off here, I want to share what is—for me—far and away the most exciting recent spirit introduction, and why.

I’ve had a thing for genever for quite some time. I was intrigued by it even back before David Wondrich sorted out for us that genever—aka Holland gin—was what was actually meant by pretty much any cocktail book “gin” reference prior to the 1890s, if it wasn’t preceded by the words “old tom”. (If none of that sounds familiar, than you need to read both David Wondrich’s Imbibe, and this really pivotal article of his on English gin.)

Back then, this is all we had in the US: 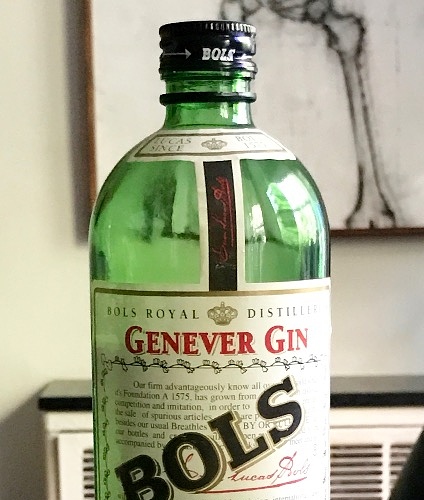 This was a bottom shelf product—like everything else labeled Bols in the US—and it had a bit of malty flavor and a hint of juniper, and was otherwise pretty neutral and a bit harsh. The Boomsma brand came along shortly thereafter and offered something similar. Both products suggested something distinctive about genever without delivering it decisively. Genever remained interesting, but fuzzy and un-compelling.

In 2007, I had the pleasure to meet Philip Duff—then working for Bols in Amsterdam—who quite generously gave me a crash course in genever (such as it was at the time) and took me to the Genever Museum in Scheidam. That museum is where I got my first sample of 100% maltwine genever. Indeed, at that time, the museum was the only place you could get such stuff. (Cool little museum, by the way. Do go.)

Folks, pure maltwine genever is a revelation. But it was essentially unobtanium.

In ensuing years, the situation improved, mainly through the introduction of the (new) Bols Genever and Bols Barrel Aged Genever products—the ones in gray bottles. These were both essentially Corenwyns—a blend of about half malt wine and half neutral spirits. Better. But still not pure maltwine genever.

Finally, after a bit of talk and an unusually short gestation period, Mr. Duff produced this at the end of 2017: 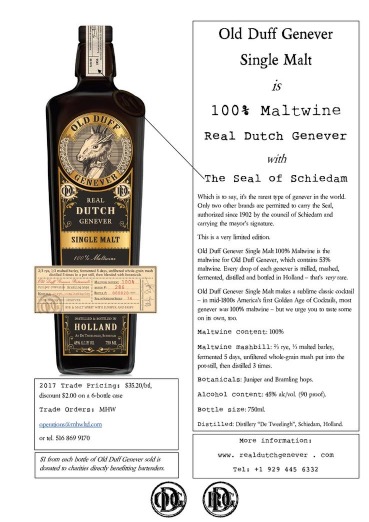 For me, this is the bomb. Not only is it the real thing, it’s way better than the best I’d had. It’s delicious. And with it you can make a 19th Century drink like the Gin Cocktail, or Gin Julep, or John Collins, or Gin Fix, and you will understand: this is what the fuss was about.

Old Duff is gradually infiltrating more markets. It started in New York. It’s now in London. It’s about to be in the Netherlands, Scandinavia, and various Asian markets. There’s a second product in the lineup in a green bottle: it’s nice too, and it’s ostensibly formulated for contemporary mixology, but it’s also 47% grain spirits and not (to me) as interesting.

If you’re not in a market you can get Old Duff, the good news is that Philip’s activities seems to have stirred the giant, and now Bols themselves are rolling out a pure maltwine genever, too:

I haven’t gotten my hands on it, myself, but I hear it’s pretty good.

At what point did 100% maltwine genever become unavailable in the Netherlands? Was it still produced in the '90s? I was gifted with a particular bottle of Boomsma back then which I’d never seen in the U.S., and still haven’t, but of course I don’t remember its exact contents.

It’s always good to see the return of antique ingredients; that this one took longer than Crème Yvette et al, given its centrality to the Thomas era recipes, is somewhat surprising.

The Old Duff is a game-changer indeed.
There’s a couple more 100% moutwijn genevers, although they’re unavailable in the US. The Bols is good and if you ever get the possibility, try and taste the Notaris. It’s made by Herman Jansen, the company that does Old Duff for Philip. They’re unique because they make their own malt wines - ironically, most malt wine used in Holland to produce genever is actually bought in Belgium (from Filliers).
It’s my understanding that the wars in the first half of the 20th century are largely to blame for the decline of 100% moutwijn genever - that, and the shift towards more neutral flavours. Interestingly, Myriam Hendrickx from Rutte says that the old-timers in Holland (70+ years old) are only drinking neutral grain spirit genever because that’s the style they first drunk when they were young men. According to Herman Jansen, there was no 100% moutwijn genever on the market from the mid-60’s to the mid-80’s, when they relaunched the style. I don’t know how accurate it is.

Attached is a PDF that Philip Duff created back when he was at Bols. It’s a little out of date, but it summarizes history, production and styles.

I have the Bols. It’s good, though I prefer Old Duff, which is a great product.

Yes, according to Herman Jansen there was no 100% Maltwine Genever (definitely not with the seal of Schiedam) available from 1962 or 1966 until 1986, when they launched Notaris. The Jenevermuseum followed that when they launched their Old Schiedam brand a few years later and then there was a long gap until Old Duff came along in 2017. There are now more 100% Maltwine Genevers (without the Seal) being made in Schiedam, and a good example is Onder de Boompjes. In fact there are a lot more 100% maltwine genevers being made and sold in Belgium than in Holland, and even France has a couple, my favorite being Wambrechies Pur Malt, which is strikingly similar to Old Schiedam. Incidentally, if your 100% Maltwine Genever is made in Schiedam and it “contributes materially to the advancement of heritage and the category”, it qualifies to carry a colorful little sticker certifying that it is a UNESCO Intangible Culturally Heritage product, as 100% Maltwine Genever from Schiedam is on the UNESCO register of intangible cultural history since about 2014. I made enquiries and the only brand that the Dutch-based certifying authority considers to qualify for that sticker is Old Schiedam, as it is part of the non-profit Jenevermuseum.

18 months later and I’ve finally broken down and ordered a bottle of Old Duff Single Malt from Astor Wines. Extraordinary.

I liken it to the first time I tried high-ester Jamaican rum—it literally resets your expectations for the entire category. Is it too late to add my vote for 2018?

Great post! Any idea how old that green bottle of Bols Genever is? I ordered a bottle from a local liquor store in DC expecting to receive the grey bottle and that came instead. Trying to figure out if I should drink it or if it’s worth saving. Thanks!

To my knowledge, the green “Genever Gin” bottle has been off the market for 15-20 years. I would be surprised if carries any significant value in collector market. On the other hand, it’s not particularly good, either, so maybe there’s no hurry in opening it.