The Life and Times of Julian Anderson of The Montana Club

Back in December, here on this site, I first learned, from Martin, about Julian Anderson, a bartender who worked at The Montana Club in Helena, Montana, and only the second Black bartender to author a cocktail book, “Julian’s Recipes,” in 1919. I’ve been digging ever since, and the result is this article for Punch.

A few things that didn’t make it into the article: Anderson’s wise observations about how people used to drink before Prohibition, and how they did afterwards; the fact that Julian’s son, Harry, burned down the Montana club in 1903 and the club still retained Anderson as bartender (by all accounted he was much treasured by the club members); and that Anderson was mysteriously shot by an unknown assailant in 1920, but survived and went back to work soon after.

Prohibition went into effect in Montana early, in 1918. Sill, Anderson’s book came out in 1919, before national Prohibition. I wonder, does this make “Julian’s Recipes” the last cocktail book by an American bartender published before Prohibition?

The club, fyi, still stands. But it became a co-op in 1918. There’s still a restaurant and bar inside, but you can go in. And the rathskeller and banquet hall are the same as they were in 1903 and are available for rental. 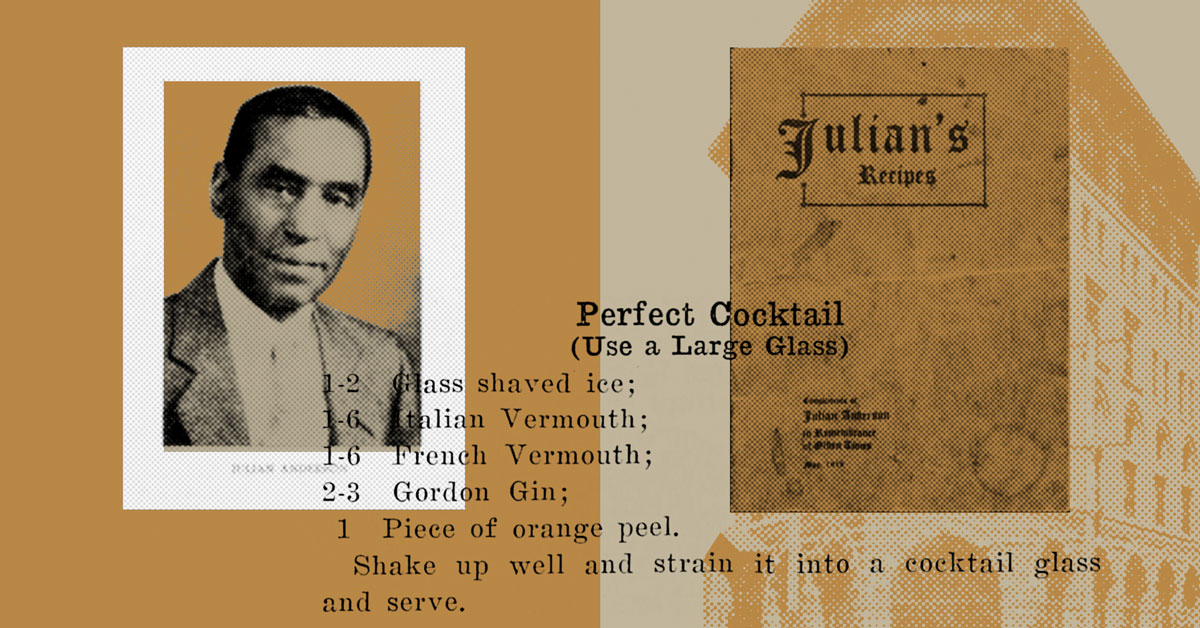 Julian’s Recipes, the second cocktail book ever to be written by a Black bartender, is the legacy of Julian Anderson, whose drinks were considered to be “better than the finest.”

Love love loved this article!! If you’ll allow prying… what were those observations on how Americans drank pre-Prohibition? Something I’ve always been curious about! Thanks for sharing.

Thanks! I was beginning to this that nobody had read this post or, worse, nobody cared. Which would be a shame. I think Anderson is such an interesting figure and, it today’s social context, an important one.

Anderson said this in 1938: “The old timers drank by slow development and they knew whiskeys and wines. After prohibition, a new generation which knew nothing about drinking came along with its bath-tub gin and drank regardless of health. Consequently, they haven’t had time to develop a proper taste for drinks.”

Anderson said this in 1953, regarding the old days: “They took pride in what they drank and how it was mixed. People did a lot of traveling at that time and they’d bring back recipes. We had a bigger collection of recipes at the club than any other place in the country."

Thanks! I was beginning to this that nobody had read this post or, worse, nobody cared. Which would be a shame.

Heh. I just assumed you had a follow-up planned.