News like the return of a higher proof Yellow Chartreuse rekindles hope for a return to the original Lillet Blanc formulation.

But I’m not holding my breath.

You’re right not to hold your breath, especially since there is no such thing as “original Lillet Blanc”.

There’s an interesting doctoral thesis on Lillet written in the mid-80’s by a French historian specialised in small, family-owned local businesses. He had access to the archive and the correspondence of the family, and it shows that Lillet was constantly evolving. There’s no original formula, but a series of changes and adaptations. The product also varied according to where it was sold – and to whom.

When Lillet was launched, it was Sauternes-based and fortified with Armagnac eau-de-vie. A ‘double quinquina’ version was sent to the colonies. When it finally found some success in the UK, Sauternes and Armagnac were distant memories – and the market got a special, drier version. The Lillet that made it big in the US in the 60’s went through a couple of different formulas. And so on and so forth.

So on what formula do we settle? As cocktail people, I would assume we’d say “the English one, the one that made it into the Savoy Cocktail Book”. That would be the Lillet ‘goût anglais’, drier, stronger (18°) and, according to the family’s correspondence, more bitter. Thing is: as far as we know, the formula hasn’t survived and we’re not even sure this is the one Craddock, Tarling and others were actually using – or rather what version they mean when they mention the brand.

In any case, odds are that the ‘goût anglais’ didn’t taste anything like Cocchi Americano or French quinquinas such as Cap Corse or new brands based on old recipes such as Aéro d’Or. Americano is vermouth with extra gentian - quinquina is a sideshow. It can - and should - be excluded as an ‘historical’ alternative. Ditto French quinquinas: they are mistelle based and heavy on the aromatics. Lillet never was. From early on, Lillet was developed as a product with strong wine character and discreet aromatisation. Its selling point compared to other quinquinas was the quality of the wine and the elegance and lightness of the formula. If us ‘authenticity’ obsessed cocktail freaks had been around back in 1895, we might have just been treating it as we treat some so-called American ‘vermouths’ today… “Not a real quinquina, bro!”

For what it’s worth, I tasted a couple of samples of French 1960’s Lillet and their bitterness while more marked than today’s product, was discreet. If I remember correctly, @Splificator once said that the samples he got access to were not bitter at all. But I don’t think either us got to taste something pre-war or ‘Goût anglais’.

Thank you for sharing this info, @francois. You’ve clarified that the murk is murk, and that is what fits the sparse, baffling data points, although it doesn’t make me any more favorably disposed toward the brand. For one thing, once you cross the line of “it is whatever we say it is whenever we say it”—I’m looking at you Campari—then you’ve probably lost me. For another, I don’t like being bullshitted, and I’ve been directly bullshitted by Lillet representatives.

It seems likely that Craddock and Tarling, themselves, had only a limited idea what they were using—this stuff called “Lillet” merely showed up one day in England, so they used it (and apparently they liked it). The bottles probably weren’t labeled “Kina Lillet” at the time, or they would have referred to it as such. I would suppose “Kina Lillet” was then just the label Lillet stuck on one of the myriad bottlings (and nice posters) for one or more markets, at one or other point in time (during the 1950-60s, at least)?

Personally, I’ve come to file all Lillet drinks with orange juice drinks: seldom worth the bother.

That’s the formul I’m inclined to “settle” on.

I will now go revise a number of Lillet descriptions I’ve written in different places.

Is the thesis available on-line? 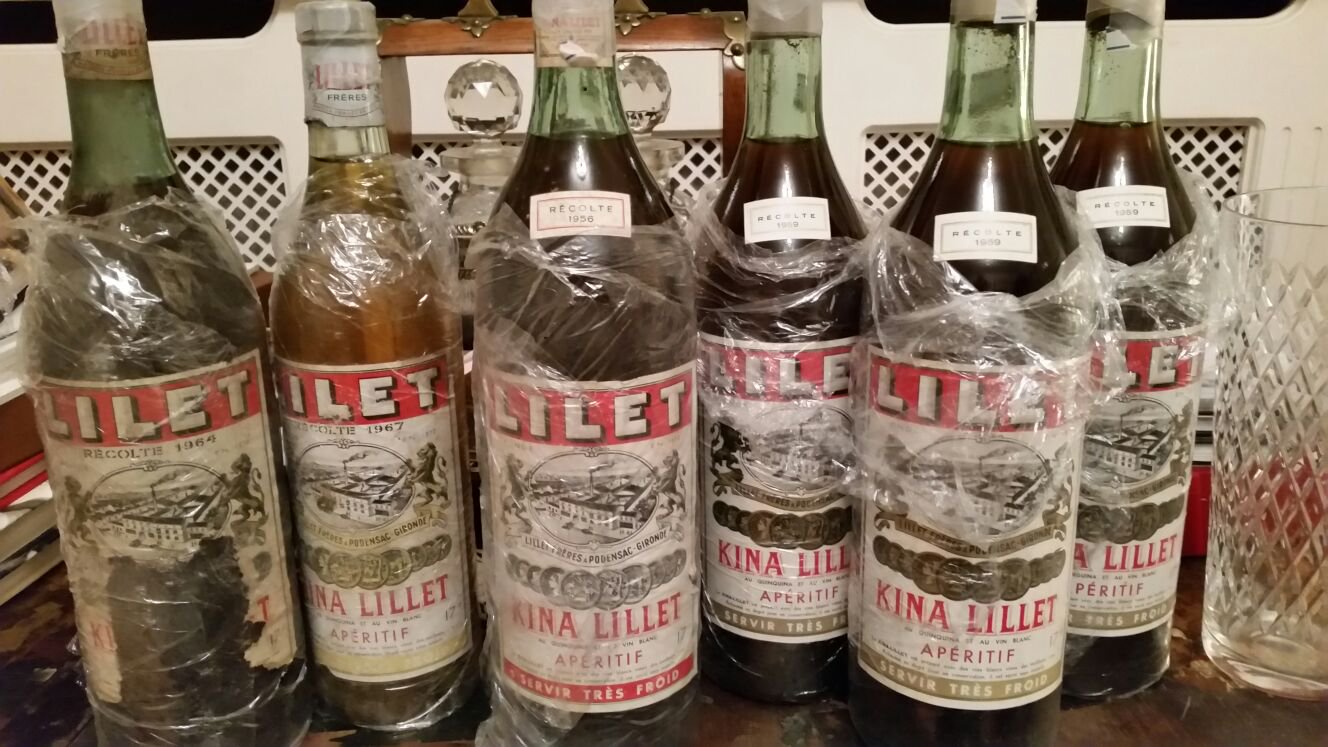 Answering my own question:

(article) As for the spelling of Lillet with one L or two, Lillet was a family name and the Lillet brothers wanted their name to be pronounced correctly: LL which was pronounced “ye” not L.

Pronunciation. The double ‘ll’ is the correct spelling but they were worried it would be mispronounced, apparently.

The thesis has been published in book format in 2002.

The product was originally called “Amer Kina” Lillet (from 1895). “Amer” later dropped. In the UK, the importer is the bottler - the stuff was sent in barrels - and there’s no ‘Kina’ on the label. According to the author, it’s for tax reasons. I understand that bottles labeled ‘Kina’ were taxed as medicinal wines and, oddly enough, those, when imported, were more heavily taxed.

Still according to the thesis, when Lillet begun its postwar US adventure, the importer requested a lighter, drier version that he could sell to dry vermouth drinkers. Hence, I assume, the whole Embury episode. It was not a vermouth but it was sold as such. It’s not clear how long that formula lasted.

Still according to the thesis, when Lillet begun its postwar US adventure, the importer requested a lighter, drier version that he could sell to dry vermouth drinkers. Hence, I assume, the whole Embury episode. It was not a vermouth but it was sold as such. It’s not clear how long that formula lasted.

Bear in mind that for most of its existence, Lillet was a regional company. Even in the 1950, its sales within its home region dwarfed the rest of France combined. Except for two golden periods – UK in the 20’s and the US from the 60’s – Lillet was a small-ish brand looking for its place. The author of the thesis actually criticises the family for not having been able to push the brand more.

This is fascinated. Thanks for posting this @francois.

Amazing. Considering it was an off-hand comment, this has become far more interesting than I could have imagined.

And in its defense, ready access to a Corpse Reviver #2 is reason enough for me to have a bottle of Lillet Blanc on hand (or better, a bottle of Cocchi Americano).

And in its defense, ready access to a Corpse Reviver #2 is reason enough for me to have a bottle of Lillet Blanc on hand (or better, a bottle of Cocchi Americano).

Yeah… or whatever you can find that works well as a wine-y modifier and stretches out the drink.

To me, the two “interesting” Lillet cocktails are the Corpse Reviver #2 and the Twentieth Century. Maybe the Alberto. It would be nice to see precise, contemporary recipes that make these drinks really sing—with or without contemporary Lillet.

Aside: a good example of Craddock wielding his Lillet as an alternative to dry vermouth is the Bich’s Special Cocktail on p. 28. (It’s his 2:1 gin Martini with Lillet instead of vermouth).

I really like Lillet. It may be true there are not many great Lillet cocktails, but sticking it in the orange juice ghetto… No, please.

It does indeed work well in some dry martini-ish concoctions but also in a Presidente. Like many, I tend to prefer quinquinas or Cocchi Americano in the handful of Lillet classics but as I commented it’s probably not bringing us any closer to what those cocktails tasted like historically.

The Lillet brothers were apparently shocked when they found out their product was mixed with gin in the UK. For them, it was always meant to be drunk straight.