An editor at Punch asked me to look into the background of a weirdly violent Angostura Bitters ad campaign from the 1940s and 1950s, in which men kept committing violence against their wives because the women made their Manhattans and Old-Fashioned without Angostura or without enough Angostura.

I agreed and the research sent me down a weird rabbit hole into the history of the cartoonist who illustrated the ads, Victor Partch, who may have been the most booze-focused cartoonist of all time, and the general cartoon culture of the time, which was peopled by hard-living artists and filled with images of violence and misogyny. One of the odder side-paths I’ve taken in the name of researching cockttail history. Take a look. 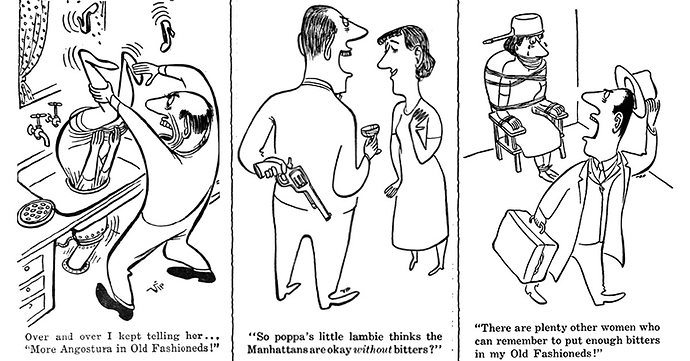 In the 1940s and ’50s, the company’s strategy for selling bitters skewed bizarrely violent and deeply disturbing.

Vicious artwork. Excellent read, Robert. This reminds me of a late 60s Spanish TV campaign for a Jerez Brandy brand – a woman goes to see a clairvoyant, wondering why her husband was so nasty to her. “Well, dear”, the clairvoyant more or less said, “if you were a good wife and served your husband a glass of brandy when he came home from work, he wouldn’t hit you.”