Sometimes a spade is best left a spade, with no gewgaws, just a quality build. 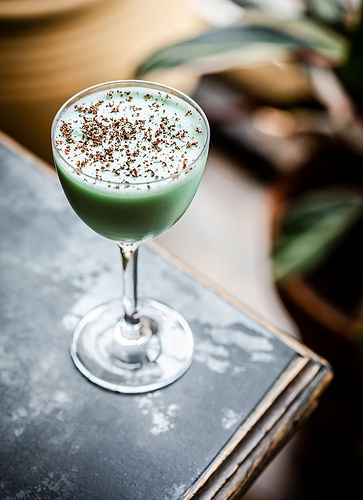 At a recent blind Grasshopper tasting, the most traditional of Grasshoppers, created by the most classic of cocktail bartenders, prevailed. Dale DeGroff wo

I’m not generally into this sort of thing, but even I wouldn’t turn down one of Dale’s Grasshoppers once in a while. Just look at Lizzie’s photo—SOLD!

Even Dale’s current version has grown up a little, though. This takes me back to the tiny bar at Beacon around 2000, where @AudreySaunders would sometimes turn out Grasshoppers in giant V-shaped cocktail glasses. I think she used that chocolate “magic shell” syrup to decorate the inside of the glass. At least that’s what I recall. This was many years ago, and I drink.

I haven’t thought about Grasshoppers in decades. Once, though, they represented a full quarter of my understanding of the world of cocktails, one comprised solely of Grasshoppers, 7 & 7s, Brandy Alexanders, and Scotch on the Rocks—and perhaps also that mysterious baseball bat bottle of Galliano that nobody ever used. When allowed the occasional sip from my parents’ glasses, there was no question that I was a Grasshopper man.

In recent years, I’ve mainly encountered the Grasshopper as a rite at Tujagues when I’m in New Orleans—a rite I generally beg off of, because… well… they just aren’t that good, there.

Dale is a good hand at these classic drinks. He won the blind tasting of the Martini, too.

I’ve always enjoyed the Tujague’s Grasshoppers, at least when Gustings was making them. Heis version used to be far simpler than the one in the article, though–equal parts creme de menthe, creme de cacao, cream, and VSOP cognac, IIRC, and shaken with ice.

There’s no way in hell Tujague’s invented the drink, though, as a quick glance at the 1908 Cocktail Bill Boothby will prove.

I learned something from that tasting about Gustings’ Grasshopper. He dry shakes it, which makes some sense in a hot climate like New Orleans. Since the drink was cooler than the air around me at Tujague’s, it tasted cool enough. But, that same method, executed in colder New York, does not work. The drink was room temperature and just came off as odd.

The recipe Gustings provided was the one from his second tenure at Tujague’s.

That’s definitely not how he used to make them at Tujague’s fifteen years ago, when I first started drinking them there. There was ice and no dry shake. It was a simple drink; normal, except for the addition of the good cognac. Perhaps it wasn’t so very mixological, but after two or three Sazeracs standing at the bar and watching him fence with the customers (“Why aren’t I smiling? Show me what your face looks like when you’re at work.”), it really hit the spot.