Yesterday, Darcy O’Neil, an authority on both pharmacy drinks and cocktails, dropped this report:

What is Grenadine Made From? - Art of Drink

This is one of those situations where generally-overlooked competition and interplay between the soda fountain and the saloon rears its head.

If Darcy has this right, it seems we now have three grenadines on our hands:

The challenge—for those of us so inclined—is to get our hands on a credible Clove-Pinks syrup and revisit the pre-Prohibition drinks such as the Jack Rose.

I read that. Very interesting. But I’m going to sit with it a while, as opposed to embracing it as The New Truth on Grenadine. Part of the problem with cocktail history research in the past twenty years is too many people take each new piece of information at the gospel truth. So we just end up substituting one mistake for another.

My main question out of the gate is whether this really changes anything at all. If the Jack Rose people have been drinking since Repeal has been the one with the red sugar syrup, or perhaps a red syrup flavored with pomegranate, isn’t that the true Jack Rose by now, as opposed to one that may have been flavored with clove-pinks syrup for a short time before Prohibition?

Even if O’Neil is right, there’s not a ton it changes. Mainly, I think it challenges the (already shaky) notion that the flavorful pomegranate syrups a lot of us are using today are somehow “more correct” than the vulgar commercial grenadines. (We can still have our preferences, of course.)

For the pre-Prohibition cocktails, the question becomes whether we’re missing something extraordinary, taste-wise? Is a Jack Rose made with Clove-Pinks something as (or more) compelling than a Jack Rose made with pomegranate syrup? To take a quasi-parallel example rife with its own semantic confusions, we had no idea the Gin Cocktail was one of the great drinks—as opposed to a terrible one that was inexplicably in the books—until we got sorted that the “gin” in the Gin Cocktail was actually genever.

Moreover, even if people try to create the grenadine Darcy is describing, how do we know if it tastes like the clove-pinks grenadines of yore? We can’t know. So we can never really know how those old drinks tasted with the old-style grenadine.

I don’t think the Clover Club has to be rethought, as that was made with raspberry syrups as often as grenadine. (And current thinking seems to favor raspberry syrup.) The Ward Eight is a bigger question, perhaps, since the drink has long been considered lacking and unimpressive.

This is an extremely interesting piece but it seems to me there are some big, big leaps in there.

So we have Clove-Pink syrup (flower’s called oeillet grenadin, in French, not grenadine) in the US and pomegranate grenadine in France and they somehow ended up being one and the same thing? I don’t know.

What is undeniable, though, is that bartenders probably never used real pomegranate syrup before the renaissance. Even in France, grenadine had ceased to be pomegranate syrup by the end of the 19th century. Indeed, one even finds ‘grenadine’ recipe made exclusively with citruses…

(The Monkey Gland is an European drink and wouldn’t have been made with soda fountain clove syrup anyway, but with French grenadine, i.e. red berries syrup.)

I was actually quite surprised by the Twitter discussion the other day as I thought it common knowledge. This was one of the first weird historical tidbits shared by @Fernando Castellon that caught my attention all those years ago.

This is of course not the only renaissance mistake. The “you can use Americano instead of Lillet of old” episode comes to mind. Or Meehan’s claim that sweet blanc vermouth is what would have been used in “nearly all early twentieth-century cocktails”. Thankfully, in both cases, said mistakes make for excellent drinks. The same goes for pomegranate syrup: I’m in @RobertSimonson camp here, I’m a big fan of the pomegranate Jack Rose. Authenticity be damned.

Pomegranates were among the first fruit trees to be cultivated, and by ancient times could be found throughout the Mediterranean world, where they found their place in legend. Six pomegranate pips …

I sat in on a discussion with Darcy on Clubhouse, yesterday, and came away with more questions than answers.

At the moment, it seems to me that Darcy is talking about American chemist/pharmacy/soda fountain recipes—his specialty—for what is either ersatz pomegranate syrup, and/or a floral/clove syrup that is both linguistically entangled (grenadine/grenadin) and flavor-entangled (he has made a batch and says there are taste similarities). Darcy conjectures that bartenders probably purchased such things from pharmacies for use in their bars.

To me, this all seems entangled with the copious ersatz ingredient recipes (e.g., for compounding ‘rum’ or ‘brandy’) that we have in various professional manuals throughout the late 19th Century, but with little evidence—to my knowledge—of how often these ersatz recipes were actually employed by bartenders in place of the real things. (I can speculate that the finer, more expensive bars had the real stuff, and that ‘anything goes’ at the cheap saloons, but that’s perhaps simplistic.)

Then, there’s the international question raised by @francois, complicated by a huge fraction of grenadine drinks emanating from European bars, rather than American. And the problem that @Splificator has already documented a marketplace of the commercial, artificial grenadines we know and loathe by… the 1890s(?)… that may not have even been driven by the ‘American Bar’ at that point, since grenadine in mixed drinks don’t seem to proliferate until later?

Anyway, this is fun!

I have, however, to disagree with Fougner’s claim, quoted in the article, that real pomegranate juice was used by “all reputable French producers” in 1936.

Since 1908, under French law, ‘grenadine’ is simple syrup, citric and / or tartaric acid and unspecified ‘vegetal substances’. If you understand a bit of French, click on the link and you’ll see that of all the syrups mentioned, grenadine is the only one where the source of the flavour is not linked to the name of the product (‘gum’ is mentioned for gum syrup, ‘almonds’ for orgeat, ‘coffee’ or coffee syrup, etc). 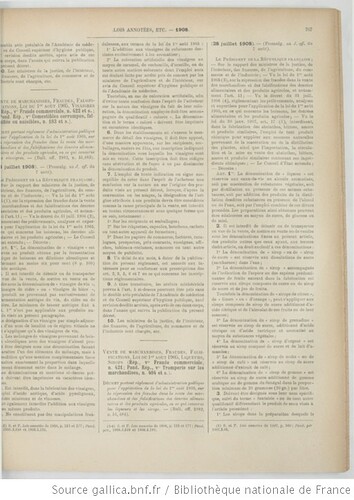 There are precious few mentions of real pomegranate being used in grenadine after 1890. Early on, you find advertisements for syrup maker using Spanish pomegranate, for example, then ads for ‘grenadine extract’ start to appear (“add 2,7 litres of the extract to flavour 100 litres or simple syrup” says one). The exact nature of the extract is left to the imagination. Towards the end of the 1880s, you find people complaining that ‘grenadine’ is not the real stuff anymore. By the next decade, grenadine is ‘sirop fantaisie’ (‘fantaisie’ here means ‘artificial’). By 1905, this is enshrined in law – a law, mind you, that deals with ‘frauds’. How ironic.

The Picon Punch, by the way, is essentially a French drink – an apéritif such as Picon + syrup (mostly grenadine, but also lemon) or a liqueur + soda: that’s the archetypal French aperitivo around 1890.

I have no idea what grenadine was used in Californian Picon Punches in 1904, but in France I can guarantee it wasn’t pomegranate ‘grenadine’…

To me, this all seems entangled with the copious ersatz ingredient recipes (e.g., for compounding ‘rum’ or ‘brandy’) that we have in various professional manuals throughout the late 19th Century, but with little evidence—to my knowledge—of how often these ersatz recipes were actually employed by bartenders in place of the real things. (I can speculate that the finer, more expensive bars had the real stuff, and that ‘anything goes’ at the cheap saloons, but that’s perhaps simplistic.)

I had the same thought. Ironically, those very manuals are now widely used by people trying to recreate authentic liqueurs, vermouths or bitters.

Chemists and pharmacists compounded their syrups, and made their soda water, that was their business and they had the U.S. Pharmacopeia as their key manual which was published in 1820 and is stilled used today. USP Simple Syrup has been pretty much the same since day one, so you can reproduce their early formulas because of the documentation. In the bar world there is still debate as to 1:1 or 2:1.

One group documented and the other didn’t. I have yet to see a bar specific recipe for grenadine in any historical book or newspaper article. I can find a dozen in historical pharmacy publications, many of them are the same because in medicine it was important to keep your products consistent. Also, shelf-stability was important and if you’ve ever left pomegranate syrup on a shelf for too long, it turns brown, which kind of makes the point of the red coloring moot in cocktails.

Does it change the world of cocktails? No, because for most of their history cocktails have been made with the modern stuff (artificial flavour and colour). But for a short period, maybe just 10 years they may have been made differently.

So, if you can find accounting information from a bar in the early 1900s you might be able to determine what grenadine was used.

Grenadine Syrup: Another Dive into the Red Simple

At this point, it has been pretty well established that all of the grenadine syrup from the 1880s up until National Prohibition was completely artificial, and contained no pomegranate at all. It is…