Introduction of citrus to cocktails in the 19th Century

Before this comes off as obsessively trivial, three big things happened to American mixed drinks in their history: the first was ice, the second was vermouth, and the third was citrus juice. This concerns the third.

We seem to be pointing at the Crusta as the watershed moment of citrus entering the cocktail, if only in vaguely small amounts. We’ve also got a somewhat elusively-documented earlier tradition of some Americans doctoring their slings and slugs with a little lemon juice (e.g., Sour Whiskey, Whisky Sweet and Sour… see Oxford p. 657). This latter business seems to me the mostly intuitively likely source of the name of the 1850s drink category “Sour”. Punch is always a factor, and the Fix looms large, being quick and small and containing a good amount of citrus juice.

By the 2oth century, we’ve got cocktail-y things under various names (Sour, Daisy) routinely containing the 3/4 oz–1 oz of lemon (or lime) juice that is common in today’s “sour” cocktails.

In between the 1850s and ~1910, it’s weird. A lot—but by no means all—recipes in this time period call for quantities of citrus juice that seem neither here nor there, today. I vaguely recall some notion that Golden Era bartender’s were employing dribs and drabs of acid to some sophisticated effect, but… this strikes me as fanciful. Another argument is that “dashes” could be very large, or were wildly discretionary. Today’s mixologists tend to look at recipes from the period that call for 2–3 dashes of lemon juice and instinctively crank that straight up to 3/4 oz or so. While that might result in a drink that is a better suited today’s tastes, when someone like Harry Johnson wrote 2–3 dashes of lemon juice, I’m pretty sure he didn’t mean 3/4 oz.

Is there an identifiable trend here? A muddle? Was citrus employed habitually sparingly in some situations due to availability/cost? Was it an evolution of taste? Did some people fancy slightly-sour drinks? (Lemonade was common, though.) Some sort of stigma to gradually overcome?

I don’t have answers, but here’s a survey, focusing on the Sour:

Thomas (1862) calls for “a small piece of lemon”, squeezed, for Sours, and “a little lemon juice” for the Crusta

McDonough’s (1883) explicitly has it both ways for the Sour: you can either use 5–6 dashes lemon juice, OR you use 1/2 lemon

Byron (1884) has most Sours calling for 2–5 dashes lemon juice, but a couple—namely the “Continental Sour”—calling for 1/2 lemon

Thomas (post., 1887) now explicitly calls for 1 dash of lemon juice in the Crusta, with some Sours calling for 2–3 dashes of lemon juice and others for the juice of 1/2 lemon

The ever-surprising Proulx (1888—Chicago) has a whole business on Whiskey Sours, calling for 1/4 lemon or 2 tsp—roughly the same quantity; also discusses the Sour Whisky, which is a Sling with “a little lemon juice”; he also has the Silver Sour and Golden Sour, which are the Silver Fizz and Golden Fizz sans seltzer, with those calling for “the amount of lemon you would for a Whisky Sour”(!)

Boothby (1891, San Francisco) describes (#290) two methods: a Western-style “sour” sling (see also Proulx, above), and an Eastern-style [Brandy] Sour with sugar and the juice of an entire lemon.

Herbert Green (1895, Indianapolis) has a couple Sour recipes that variably call for 1/4 lemon or 1/2 lemon

Boothby (1908, San Francisco) (#404) has replaced previous with gum syrup or sugar, and the juice of TWO lemons!

It does seem to me like the cocktail recipe world has largely bifurcated into the margarita/daiquiri/sour shaken world expecting 3/4–1 oz citrus in a drink and the boozy stirred world that eschews citrus entirely. I think this binary conceit misses the “sharpening” benefits of citrus in smaller quantities. Here are three of my inventions that use between a barspoon and a quarter-ounce of lemon:

Your choice of the word “sharpening” would seem to place you in a modern culinary camp, perhaps in the same spirit as those who season their cocktails with saline? (I don’t discount either technique.) No question that a small measure of citrus has an effect, and “sharpening” seems like a reasonable word for it.

I may be overlooking something, but I haven’t picked up on 19th Century bartenders talking about citrus in a comparable way—or really (directly) talking about it at all.

Perhaps Santini was intuitively “sharpening” the Brandy Cocktail when he made the Crusta? Seems possible. Or was he countering his elaborately sugared rim? Are there some other old drinks that might shed light on the matter?

Given there was a longstanding habit amongst some drinkers to add a touch of lemon juice to their whiskey, presumably they liked the tanginess better than a merely sweetened whiskey? Was a Sour to the Harry Johnsons just the old Whiskey Sweet and Sour, whereas to many others, the Sour was a strained Fix without the decorations?

The other variable I didn’t see you address is: has the fruit itself changed? Have there been changes in agricultural practices, varietal breeding, changing sources, etc. that made the fruit used in the century before last quite different from what we work with now (in volume and/or flavor)?

I have never read anything that suggested regular lemons or their juice changed markedly during the last couple centuries.

So, this is Harry Johnson’s Gin Sour recipe: 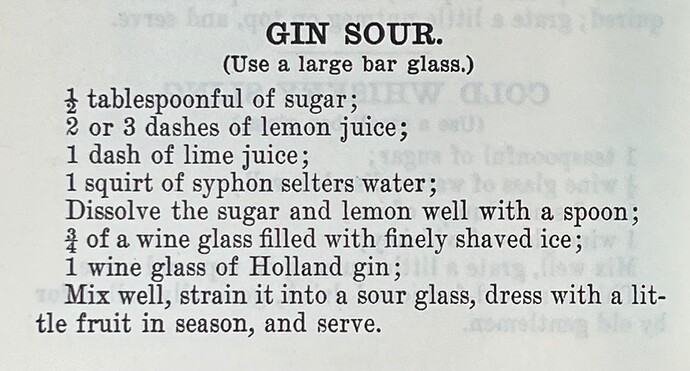 And this is about as straight as I can make it, given the clunky verbiage: 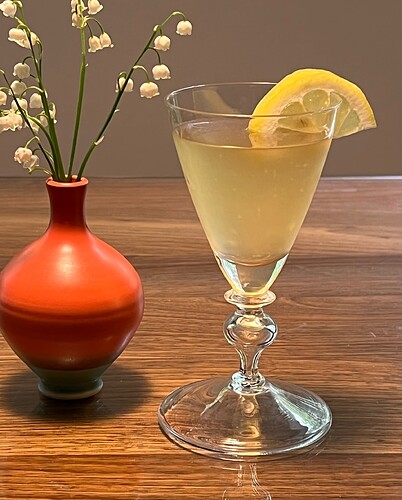 I dialed back the sugar a touch and probably would earn an D-minus (at best) from Harry for my garnishing efforts.

As you can see, it is a slightly hazy drink, being nothing more than Gin Sling with a light touch of citrus. It bears absolutely no resemblance to a Daiquiri or anything else we would typically call a “sour”, today. Compared to a regular Sling or an Old Fashioned, it is, nevertheless, sour.

It is also quite nice.

This 1967 article touting California-grown lemon growers says “Their share of lemon sales in the United States rose from a few per cent in the 1880’s to 18 per cent in 1900. By 1920 their share had increased to 75 per cent. After 1930 only small numbers of foreign lemons were being imported and American lemons were entering West European markets in large numbers.”
So even setting aside “terroir” or variety differences, I would think the shorter transportation times of domestic lemons that took over in the twentieth century would likely change how American drink-makers might have used them compared to the import-dominated days of the nineteenth century.