@Splificator has mentioned many times the degree to which Jerry Thomas’ book was simply recycled by subsequent authors—for decades—with little attempt to disguise the plagiarism. Here’s one example I cherry-picked because I thought it was kind of interesting: 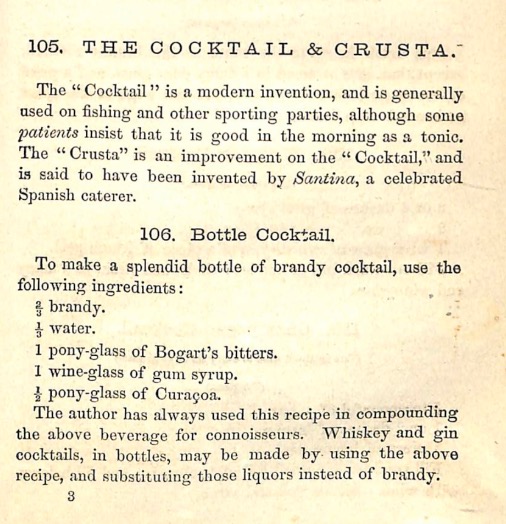 Above is part of page 49 from Thomas’ book. The first paragraph introduces the Cocktail section, and includes the (misspelled) attribution of the Crusta to Joe Santini. Next comes Thomas’ general purpose bottled cocktail recipe. 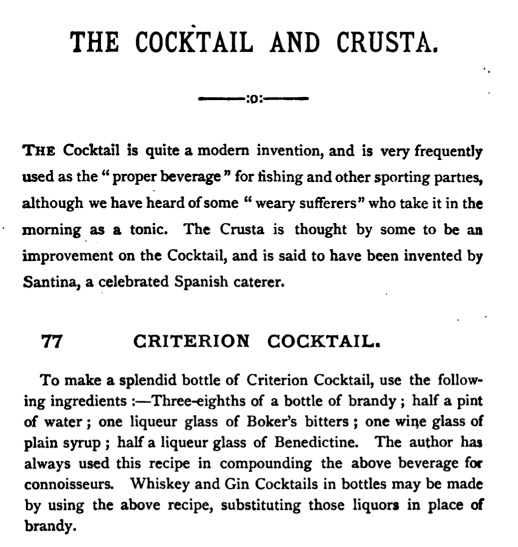 At first glance, the first paragraph appears to be verbatim Thomas, but no, Engel tinkered with both sentences, making the latter sentence about the Crusta a bit less… enthusiastic… while retaining the misspelled attribution.

For the bottled cocktail recipe, Engel has substituted his own variation: it’s a similar idea, but featuring Benedictine instead of curaçao. Sorting out his measurements looks tricky.

An interesting angle to this is added by the fact that Leo Engel had actually worked for Jerry Thomas (or “side by side with,” as he put it). He advanced this claim in a letter to the Paris edition of the New York Herald in July, 1891, when he was at the New York Bar at 10, Place de la Madeleine (the current New York Bar was only the last in a series of Paris bars with that name). That makes this even more pointed. Good catch.

That is interesting! Did he say where? Is there anything to corroborate his claim? Thomas was dead 5-6 years by 1891 and Engel’s book was a decade prior. In any case, I’m delighted to learn that Engel’s trail doesn’t just go cold after 1875.

He doesn’t, but he had worked in New York for a number of years (starting at Paul Meade’s Ridgewood Shades, in Brooklyn) and there’s no reason to disbelieve him. He left for London in 1874.

He left the Criterion to open Leo’s Desideratum (fka the Crown and Thistle) in Haymarket, London, in 1882; that enjoyed a prolonged bankruptcy beginning in 1884.

In 1888, he tried another place in London, Leo’s Grand. That didn’t work, either. Then he went to France, working at the Hotel de Paris, Monte Carlo in the colder months and at the New York Bar in the summer. he died in Monte Carlo in February, 1893, feeling greatly under-appreciated.