I have a non-drinker (for medical reasons) in the house, so I’ve begun investigating the burgeoning market of alcohol substitutes.

First up is the Seedlip product range. 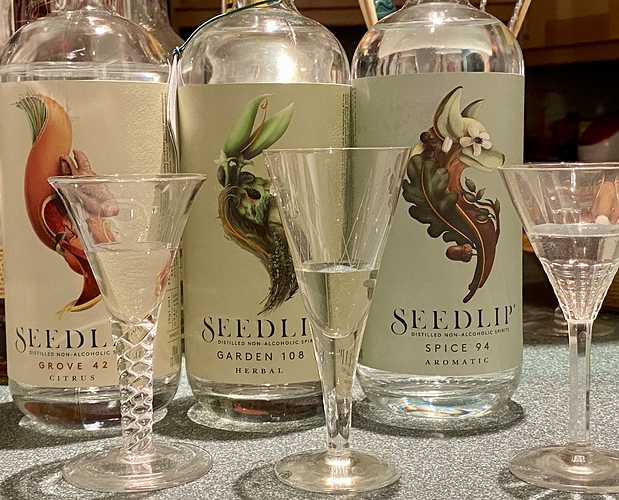 These are obviously hydrosols. Grove 42 is orangeyish. Garden 108 is herb and cucumber. Spice 94 is spiced, although dominated by clove. There’s a very mild acidity to the first two. Actually, “mild” is a good general descriptor for all three: these have about as much flavor intensity as those lightly flavored seltzers. They taste pretty much like water that something has been floating in. For someone accustomed to the intensity of spirits, this intensity gap is a bit hard to adjust to.

Cute labels. Too cute. The bottle doesn’t pour worth a damn. At around $35 for 70cl, that’s some expensive water!

Made a “Margarita” with 2 oz Grove 42, 1/2 oz lime juice, and a bit of syrup. Tastes a bit like limeade with a touch of orange flower water. Hmm.

I was hoping to dive into this non-alcoholic spirit thing when my wife was pregnant but it turned out she had gestational diabetes so we quickly gave up on the idea.

My biggest complaint with Seedlip is texture. It’s so thin on the palate. Oddly enough (or not…) the best results are when it’s mixed with… spirits and used as just another cocktail ingredient.

Aecorn, their aperitivo range, may work better as substitutes for vermouths and red bitters, but don’t take my word – I’ve only tasted them straight once and never played with them.

Of the bunch I’ve tasted so far the only one I’ve really enjoyed (in Spritz-like serves) is Everleaf. I think it’s a nice, flavour-packed product.

Those Aecorn products don’t seem to be available over here, yet. Any idea what they’re using for a base? Grape juice?

There are some other players in this space, such as Monday “Zero Alcohol Gin”, the Ritual product line, and Lyre’s sprawling product line (interesting choice for a brand name). I have tried none of these yet.

Those Aecorn products don’t seem to be available over here, yet. Any idea what they’re using for a base? Grape juice?

No. I would think something similar to Seedlip with the infusion making up for the lack of texture. I should look into it.

My stance on non-alcoholic cocktails and spirits, which I’ve grown less and less shy about expression, is that they just aren’t any good. I haven’t had a single one I’ve liked. Moreover, they are not cocktails and spirits at all and shouldn’t be called that; they are soft-drinks. I rather resent the appropriation of the terminology.

I get it. Although, to be fair, a hydrosol is a distillate.

Water can be a distillate too, when distilled from salt water, but I’m not going to pay $35 a bottle for a fancy bottle of from Diageo, no matter how cute the label. I’m sorry-not-sorry but I’m with Robert on this one. Generally, I’m fairly sanguine about the silliness of such things, but lately the appropriation of science words by companies that know they’re being disingenuous is really chapping my ass.

To my knowledge, Seedlip never uses the word hydrosol; instead, they seem cagey about what is in the bottle, and that’s a different flavor of dubious.

It’s easy for us booze drinkers to be dismissive of non-alcoholic drinks, but there is a real need even if it’s not really being met satisfactorily. A non-drinker wants something that tastes good and where they can feel they’re included and not stuck holding a glass of something juvenile.

The gold standard, as far as I know, is the non-alcoholic menu at Existing Conditions. Those booze-free drinks are sophisticated and tasty, if eye-bugging expensive. They’re also not make-at-home.

The best luck I have had is with shrubs—those bring booze-level flavor intensity, some complex flavors and aromatics (mainly from the vinegar), and usually a bit of color. The limitation of shrubs is that they inevitably taste like shrub.

There’s a vast trove of temperance drink recipes from back in the 19th and early 20th Century—I probably ought to give them a serious look.

I’d thought a great deal about this back in SF when I had a good friend who, for a time, also couldn’t drink for medical reasons. Coming up with a decent substitute is a very complex problem, and as there were almost no options on the market at the time, I never came up with an effective solution and soon got distracted by something else once his course of medication completed.

Which part of a cocktail is the most important to you (and her)? Is it the raw bite of the alcohol or the conversion of an undrinkable flavor into something pleasant? A very strong and complex flavor over a short period of time? A temperature at or below the freezing point of water? The variety of options? The ritual of preparation? The inherent “specialness” of something with a built-in drinking “speed limit” (through either dosage, taste or cost)?

I don’t know of anything that can neatly and completely substitute for the mechanical, chemical, gustatory or physiological effects of ethanol. I’d started thinking that maybe focusing on one or two of those elements might possibly work.

In any case, to be a truly satisfying experience, it can’t just be a substitute. I would think it would need to be a unique experience of it’s own.

Great questions John. And Martin, thank you for insisting on this point. As someone who spent the greater part of a decade pregnant or nursing, there have been great swaths of my life when alcohol was just not an option. But beyond that, it is a fact that many women cant consume the same levels of alcohol as many men. So yes, I want good grown-up no-abv and low-abv options everywhere all the time — with some combination of the options John lists. I want that for all of us, whatever gender, medical situation or lifestyle decision. But I still would like to reserve some crankiness for the way the terms “distilled“ and “spirit” are being used for infused water products. As consumer I always want to press companies to move away from that sort of obfuscation. Harumph

This stuff is called Monday “Zero Alcohol Gin”. It appears to have such a high essential oil content that it is hazy in appearance. This product appears to be compounded rather than distilled. They’re using Xantham and Locust Bean Gum to give it body (which is evident), and it’s flavored with juniper extract, coriander extract and cucumber extract. The nose has some juniper and plenty of cucumber. On the palate, there’s no alcohol bite (obviously) but there’s a strong juniper backbone that is just on the good side of bitter. A hint of citrus (citric acid). The ingredients also lists monk fruit extract, but I don’t know what that tastes like.

In a faux Gin & Tonic, Monday does succeed in adding the juniper character that a dry gin would contribute, and it does no harm. Alone and with tonic water, I am already more favorably impressed with this product than I am with the Seedlip products, but I haven’t tried it in anything else, yet. 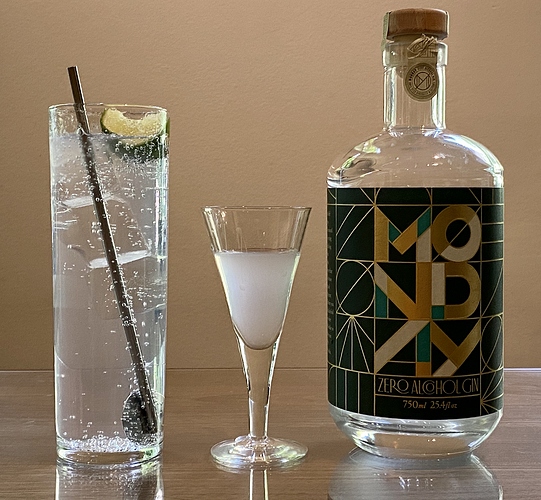 I get prickly about non-alcoholic products making a big deal out of saying they’re distilled. But this one has been criticized for louching, and for tasting like flat soda, and those criticisms make me throw up my hands. You cant win for trying as we used to say somewhat nonsensically. It seems we’ve come full circle to the types of drinks that pharmacists once served in soda fountains. What is old is new.

Giffard Bitter Syrup. For those of the SanBitter persuasion. Excellent in a highball or cocktail.

Buying aromatized water makes no sense. I love a non-alcoholic drink, but would absolutely never pay for NA ‘spirits’. Why not make some tea or tisane and spend next to nothing? 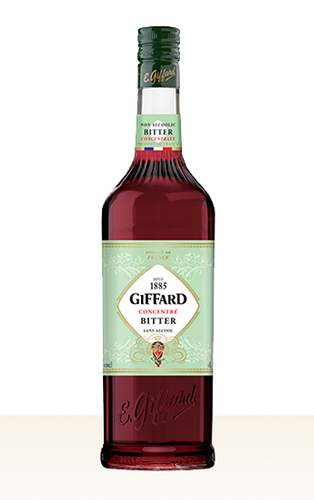