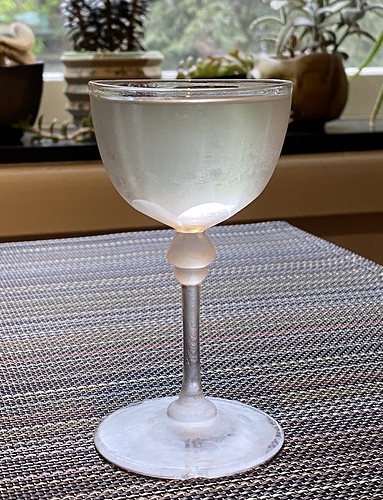 It’s tiny, cold, smooth, and quite complex. (I made it with Hayman’s and Angostura Orange Bitters.)

I REALLY want to hear more about this phoenix cocktail. The beginnings of a gin based ‘a la Louisiane’? Yes please.

I’ve got nothin’ but this token recipe in an obscure Chicago recipe booklet.

A cursory newspaper search reminds me that Chicago was sometimes referred to as The Phoenix City (having risen from the flames of the Great Fire of 1871). The city of Phoenix in the Arizona Territory was incorporated in 1881, which works from a timing standpoint, but I’m not sure why a Proulx would yet find that frontier town interesting.

I feel Proulx is reasonably careful about his wording, so when he says “a few drops”, I assume he really means just a few drops. (I used about 1/3 bar spoon of Benedictine and 1 dash of Angostura Orange to 2 oz Hayman’s Old Tom.)

Some version of his “prepared in the same manner as a regular cocktail” phrase is repeated in many recipes throughout his book as a shorthand for the process he details for the Whisky Cocktail:

Does that also imply that he’d add “two squirts of bitters, syrup and absinthe” to the Phoenix? In some recipes, he’s specific, such as his Martini recipe, where he says “no absinthe” (but perhaps still bitters and syrup). With the Phoenix, he offers no additional guidance. I’m assuming no absinthe, syrup or bitters, because two squirts of any of those three things would completely overwhelm the mere drops of Benedictine and orange bitters that decorate the Old Tom.

(I find Proulx fascinating because he’s pretty much the first of the prose-writers, anticipating Kappeler, and prose can be revealing. Unless it’s carelessly written, in which case it can just confuse matters.)

Thanks, I’ll get to experimenting!

So is the Phoenix a Ford without vermouth or the Ford a Phoenix with vermouth?

I think the most distinctive thing about the Phoenix is that it’s almost nothing at all. Old Tom gin, with a Benedictine accent, and a touch of bitters to make it a cocktail. No additional sugar is required. For that matter, you could easily omit the Benedictine and it would still “work” as a small cocktail.