Okay, here’s a conundrum. At least since the 1980s, a Stone Sour has been, as the indispensable 1988 Sardi’s Bar Guide puts it, “of course, a sour with the addition of orange juice.” That’s not how Jacques Straub saw it in his 1914 Drinks, the earliest mention I’ve been able to find for the drink (his is a Plymouth Sour served frappéed), but it is how Tom Bullock saw it with his (gin-based) Stone Sour in 1917. My problem is I can’t find the link between Bullock and Sardi’s. Who else made their Stone Sours with orange juice? It’s not in Mr. Boston, the Savoy book, Duffy, Haimo, Trader Vic’s bartender’s bible, Embury, Saucier, Stan Jones or any of those guys. So how did a drink from a very obscure Midwestern bar guide and a bartender who left the profession with Prohibition and never went back to it become a New York City standard? I’m probably missing an obvious source, but it’s got me scratching my head.

Done a little more digging: the drink starts turning up in Chicago and Wisconsin (why am I surprised?) in the mid-1970s, with one attribution at the time to the South Shore Country Club in Chicago (1905-1973). That of course makes me wonder if the drink had gone from the St Louis country club where Bullock worked to the Chicago one, and lurked there until it broke out 50 years later. Seems far-fetched, but not impossible. Clearly more work needed.

I have assiduously disregarded this drink for years, because I believe it is crap. However, I cannot resist a mystery. Dale DeGroff says this in Craft:

I don‘t know who coined the name first, but it came from California. As a matter of fact, Stone Sours were also called California Sours. Stone Sour just indicates the addition of a little fresh orange juice.

Smells a bit like some sort of citrus industry promotional thing. Maybe to put something “fresh” back into a sour mix drink? And what does “stone” have to do with oranges, anyways? Peaches and apricots, sure, but oranges?

While I agree that, in general, the Stone Sour isn’t the most interesting of drinks, it can be delicious: Julie Reiner’s divine New York Sours at Clover Club are actually Stone Sours, although the amount of orange juice is considerably reduced from some of the versions one would see in the 1970s.

But this problem interests me because it appears to offer a point of influence for Tom Bullock, whose book is generally treated as interesting but something of a dead end (its early recipe for a Gimlet aside).

There’s something weird going on with the history of this drink. Its attribution to the South Shore Country Club in Chicago comes from an August 12, 1980 Los Angeles Times article about this guy: 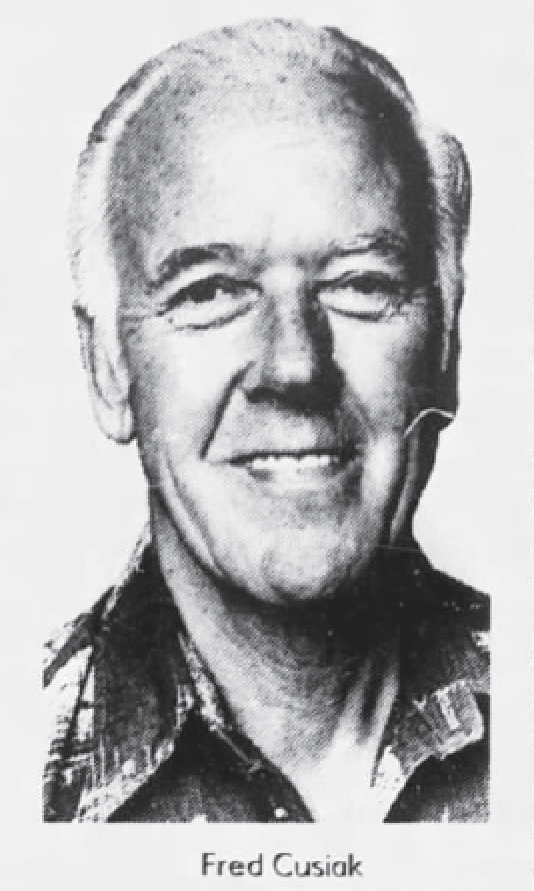 By his account, Fred Cusiak had come to Southern California from Michigan in 1933 and tended bar there ever since, working at a roster of tony places in Palm Springs, LA and Orange County before becoming a widely-popular drinks caterer for private parties, celebrity-hosted and otherwise.

Unfortunately, beyond that article there is literally nothing findable online about Mr. Cusiak–no census, no draft card, no nothing. That is very rare. The timeline he gave of his career checks out (places were open when he said he was there, etc.), but beyond that he is a complete mystery.

Among the places he worked were a couple private clubs: the Somerset House, on La Cienega in Los Angeles, where he would have been around 1940, and the Balboa Yacht Club in Newport Beach, where he was soon after it opened in 1948.

There’s no sign that he worked at the South Shore Country Club itself, but if he came from Michigan that’s certainly in thee neighborhood.

He’s not the only country club link to the Stone Sour, though (besides Bullock, of course): the first place I’ve found it explicitly identified as a sour with added orange juice since Bullock is in a 1973 article from the Tinley Park, Illinois Star. Tinley Park is part of the belt of Chicago’s prosperous western suburbs. In the article, local restaurant manager Bill Doyle gives his recipe for his idea of a “golfer’s delight,” a “Rum Stone Sour.” Doyle, it turns out, had been thee bar manager at the Ridge Country Club, in the same belt of suburbs but somewhat closer to downtown. It was the Rum Stone Sour that first began spreading around in the mid-1970s, although it was rapidly followed by the Vodka Stone Sour, the Apricot Stone Sour (with apricot brandy as the only booze), the (blended) Strawberry Stone Sour, and of course the Amaretto Stone Sour.

So maybe not the most interesting drink, but the idea of a hermetic, private-club school of mixology, with Tom Bullock as one of its bright stars, does rather appeal to me. It doesn’t have to be good mixology–in fact, from my experience of secret private-club drinks, it is usually indifferent at best. But there’s something Pynchonesque in there that I like.

Would be nice if it starts to link up. I’ll poke around in some of the more obscure holdings at the library this coming week and see if I turn anything up.

I did note that Bullock’s Stone Sour has very little orange juice in it. It could be read as an early “acid adjusted orange juice”, and not a big slug of it like the drink became known for. But then again, Bullock precedes the big orange industry, which I understand didn’t get rev up until well into Prohibition. I conjecture that Bullock’s oranges were motored up the Mississippi from points South, and they might have been relatively bitter/sour/aromatic specimens compared to what we’re accustomed to?

That’s an interesting question. The Bronx cocktail had made oranges popular in American bars, beginning in around 1905 (the drink was a little older than that). I don’t find a lot about the Bronx being tart, so I suspect they were Valencia oranges, although it’s quite possible–even likely–that they were less insipid than the ones we have now.

And yeah, it would be neat if this stuff linked up. As it is, it’s a curiosity, with Bullock standing alone.

Were you drinking them in high school? The Stone Sour is certainly a Midwest thing, although I have no doubt Dale found it in California, too. The first Amaretto Stone Sour–which seems to have been its most popular iteration–that I can find is from the Diamond Supper Club in Menomonie, Wisconsin, in 1982:

Love that ad, by the way.

Wish we were there, no? Amaretto Stone Sours and all. (Okay, I’d probably switch to Old-Fashioneds after the first one.)

I sounded out John Dye, owner of Bryant’s Cocktail Lounge and At Random in Milwaukee, and he said this:

“We don’t have any variations of a stone sour on our menu. We usually come across that term when someone uses it as a modifier on a Wisconsin style old fashioned (e.g., Brandy Old Fashioned Stone Sour). I’ve seen variations where it is half sour soda (Squirt or 50/50) and half orange juice or lemon based sour and orange juice. When I worked a bar in the early 2000s we made a ton of Amaretto stone sours. I had never heard that term on the west coast.”

John is originally from Montana, fyi. So you idea that it’s a Midwestern thing.

Did a quick search and that Amaretto Stone Sour seems to have been crazy popular in the Midwest in the 1990s and 2000s. The recipes seems to check out with what Dye described.

The inimitable Phil Ward made us a round of miniature Amaretto Stone Sours, with egg white and a Morgenthaler-style splash of Booker’s. They were, frankly, delicious, in their easy, accommodating-to-all way.

And yeah, it really blew up from the late '80s until well into the 2000s. I’d still like to know what it was doing between 1917 and 1972 (there are a few refereences to Stone Sours in between, but none with the defining orange juice).

I spent an hour and a half today in the CK library digging through all the obscure 60s-80s books looking for anything to do with the Stone Sour or the “California Sour” that Dale mentioned. I found very little, but not nothing.

First up is from a Bantam paperback in 1967 derived from Esquire material (no o.j., and it’s got crème de menthe and mint in it, for some reason): 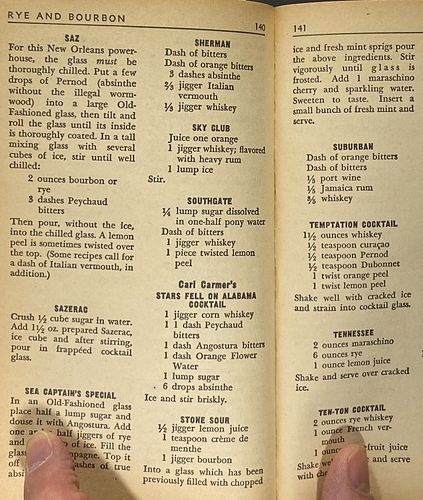 Next up is a Stone Sour from the 1978 Le Grand Mixology International Bartenders Guide by James Johnson (Florida), which brings the o.j., but now it’s a scotch drink:

I found zero references to a “California sour”. This is a purely a tangent, but this “Californian” drink did pop up a couple times, and it struck me as mildly intriguing on its own merits:

The Bantam one is from the massive 1956 Esquire Drink Book, a very useful book but now rare.

Interesting about the 1978 one–that appears to record the reawakened drink (and, funnily enough, I also talked Mr. Ward into making me a Scotch Stone Sour last night, which was delicious. Only a little orange juice, though.

There was apparently a band called Stone Sour, formed in the 1990s. From Iowa, natch. Took their name from a cocktail menu.

@Splificator has now written on the Stone Sour at the conclusion of this piece: 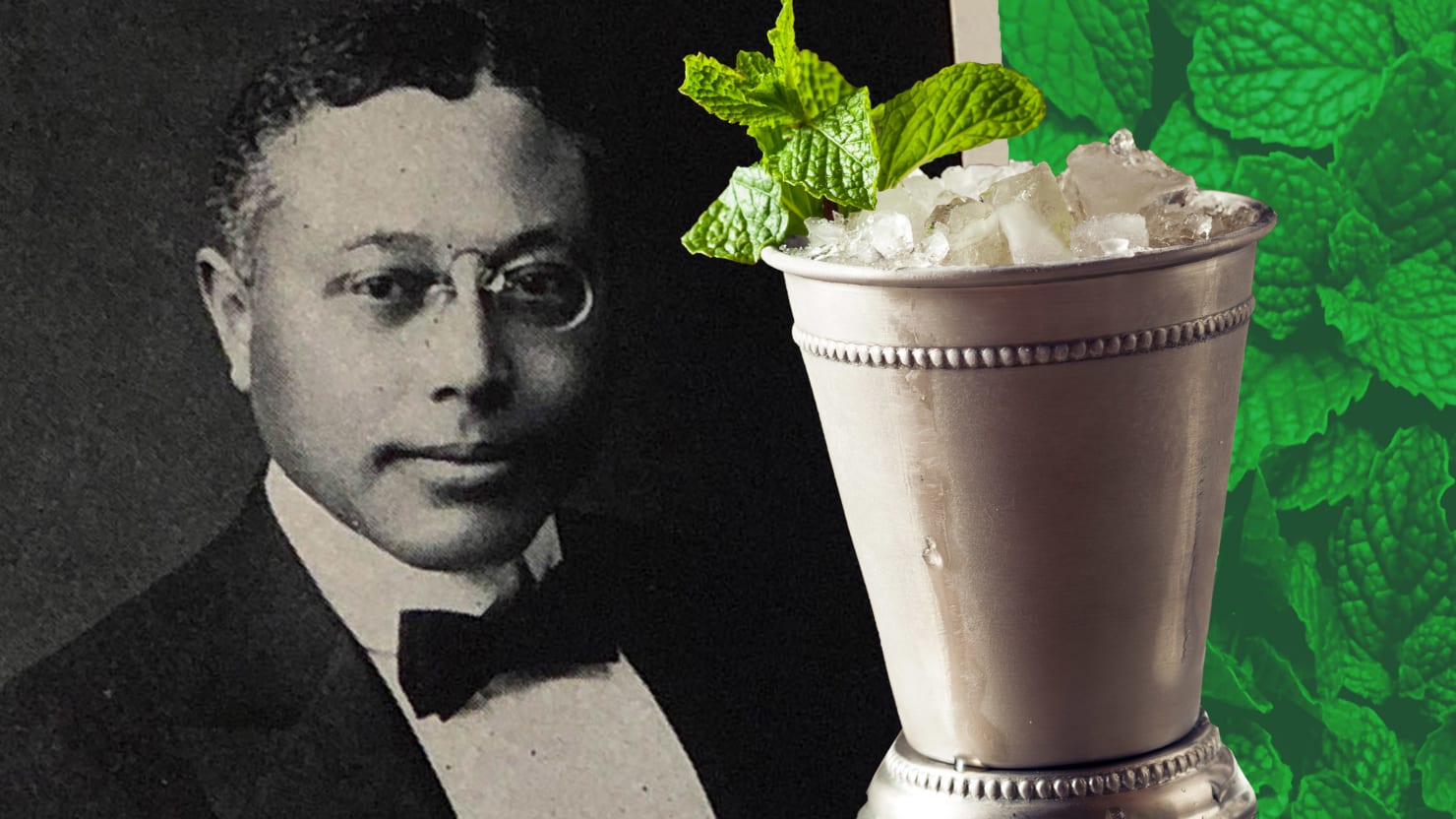 The Lost African-American Bartenders who Created the Cocktail

Black bartenders across the South made the Mint Julep a national sensation and, in the process, invented modern mixology.