I dug this up recently while looking up some prohibition information and I’m curious to see how far off i am with my assessment of the situation.

The letter is dated back to 1929 which is smack dab in the middle of Prohibition.

The letter starts off by defining what a “Manhattan” was according to the cocktail books of the time and my best guess is this letter is in response to a petition sent to the state.

The original request goes on to justify that because a “Manhattan” contains just as much whiskey as it does, let’s say, kummel, creme de menthe or vermouth, that it can basically be considered a non-alcoholic beverage… (Was Creme de Menthe not considered truly “alcoholic” at the time?) It would be unfair to categorize it with hard, and prohibited, spirits such as rum, gin, whiskey, or vodka…

The letter is written in response to this plea with the obvious rebuttal of “Yeahh this still contains 30-35% alcohol. If it was, in fact, without alcohol, we would totally agree.”

My guess is that some legend tried to argue that the cocktail shouldn’t be banned and was attempting to free his long lost pal.

What do you think? 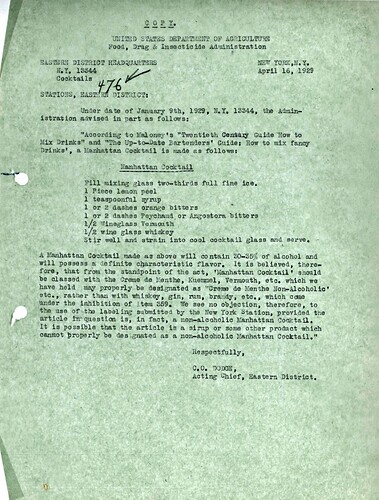