The Wine and Spirits Bulletin

The Wine and Spirits Bulletin was a pre-Prohibition industry journal “Devoted to the Interests of the Wine and Spirit Trade” published out of Louisville (and sometimes Cincinnati), apparently beginning in 1886 or 1887, and running at least until 1915, and possibly a little longer. These monthly newsletters typically ran 50-90 pages, and are packed with ads and context—at least from a Kentucky/Ohio perspective. They include—as you might expect—a lot of about the looming temperance threat. 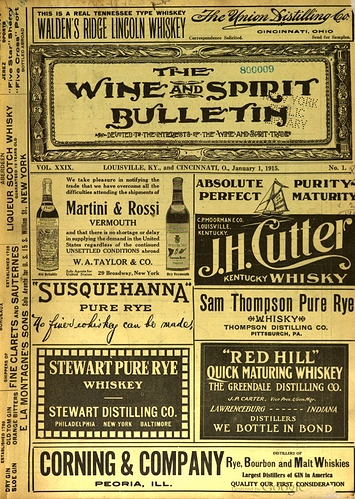 Google Books has digitized at least three volumes (years worth) and I’ve excavated those for your convenience. There may be more buried in Google Books, but I haven’t found them yet (yeesh, what a mess). The New York Public Library seems to have been one of the sources, so they might have more in their holdings. It would be swell to eventually locate more. [update: added additional volumes located by @C.Oneal]

This is the same outfit that published the nifty Beverages De Luxe in 1911 and 1914 that you can find over at the EUVS site.

What great artifacts and much needed distractions. Hope all well.

I found 3 more full editions on Google Books, and “info” on another couple.

These are very cool, thanks @martin for sharing them with us!

It is an amazing little tour around bars and clubs across the US in a pivotal moment in cocktail history. The New Orleans section is special. The advertisements are incredible as well.

I’ve seen very few people reference it. One of my absolute favorites. 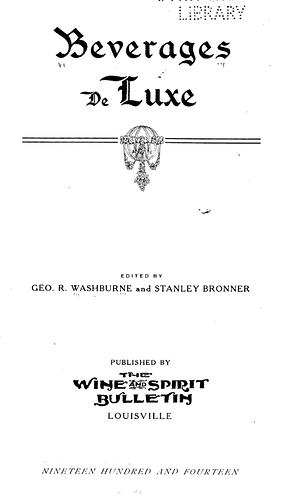 Do you know of any other publications from that time period with a similar format? Features of bars and bartenders?

I really like to see what the bartenders have chosen to submit. Gives an idea of what the working bartenders (who would never write a book) were actually serving and producing for a crowd. As well as what the people in those cities were drinking.

Every time this thread is updated I seem to lose another three hours going down rabbit holes. Quit it!!

Looking through the 1911 Beverages de Luxe, I’m noticing that the author is describing Italian Vermouth as a sweet, white wine made primarily from Muscat, and I’m not seeing anything about sweet red styles. My understanding was that by the turn of the century the sweet red style was very much on the scene and had surpassed the “bianco” style. @Martin or @francois would you know the history of that? Would early recipes calling for Italian vermouth work with blanc/bianco styles?

All the vermouths (except for a few oddball contemporary ones) were and remain fortified white wines. I’m a bit unclear when it happened, but at some point in the early-ish 20th Century—for marketing reasons—the Italian producers began coloring their core products with significant caramel coloring and eventually adopted the “rosso” designation, to differentiate it from the dry and bianco styles they adopted around 1900 and 1910, respectively (the years vary a bit from producer to producer, but those are the years for Martini & Rossi). Somehow, this dramatic change in coloring didn’t bother many people, and it quickly became the norm. (I wonder if it happened during our Prohibition, and that’s why it was a non-event?) For early recipes calling for Italian vermouth, you want rosso, even though the resulting drink will be darker than it would have been at the time. For example, a 1880s Manhattan would have been much paler than we are used to seeing today.

Aha! And here I was still thinking that red vermouths had some sort of red wine component in their base (wine-seller me should have known better–those tannins would’ve had to go somewhere!).

To add to Martin’s excellent summary, equating colors and styles is a recent development. It’s actually impossible to understand vermouth historically if we think in those terms.

The only thing that really matters is style / taste.

Modern vermouth as developed in Turin in late 18th century with a medicinal / herbaceous profile evolved over the next century, becoming friendlier and more spice forward. That style was adopted by bartenders for Manhattan, etc. It only became known as ‘rosso’ in the 1910s and was probably golden in Harry Johnson’s time.

Blanc / bianco is Chambéry vermouth, a semi-sweet style created around 1820. Originally golden too, it was first filtered in 1881, when it was first called ‘blanc’. This style didn’t find the favors of cocktail bartenders until the Cubans discovered it in the 1910s.

Using blanc in historical formulas might yield tasty drinks but is not an accurate reflection of what the cocktail would have tasted like.

However, vermouth del Professore Vecchio Opificio, a new version of the old Turin style, has led to some confusion among bartenders. As it’s meant to reflect vermouth as it was made around 1880, it’s uncolored. People, misunderstanding vermouth history, have taken to calling it bianco or blanc. It is not, as should be quite obvious if you taste it.

This is so illuminating, and it puts into context a really exceptional vermouth I tasted at Cafe Mulassano in Turin when I visited back in college. It was house recipe, vibrantly golden, and I’ve never been able to place what it might have been–my lack of booze knowledge at the time notwithstanding. Maybe it was their take on a more traditional style!

The Mulassano vermouth line-up is currently produced for them by Bordiga; their ‘bianco’ has a deeper shade than other biancos, and a more herbaceous profile. I don’t think they actively seek to emulate historical uncolored Turin vermouth, though. It might be similar-ish to the first biancos of around 1910. I need to revisit.

Back to the topic: Is anyone aware of other publications from the 1910s that survey the landscape of the bar and spirits world like Beverages de Luxe?

I love getting a glimpse into what the working bartenders were making at their clubs, people who would not have written books about it.

At this time, nothing else comes to mind.

Really the only place such things are found is in the newspapers of the day. I’ve been trying to persuade someone to publish an anthology of the best such articles for years, to no avail. In the meanwhile, you can start excavating you town for free at the Library of Congress’s Chronicling America site.