Taken collectively, the dozen editions of his ABC of Mixing Cocktails that Harry McElhone published between the early 1920s and the early 1950s are among the most influential cocktail books of all time. They mark the earliest appearances of many important drinks and are a window into the internationalization of cocktail culture as it occurred. Unfortunately, none of those editions are dated (only McElhone’s self-published 1927 Barflies and Cocktails, an illustrated version of the ABC book, bears a date).

In the spirit of this old thread:

I’m trying to untangle the dating of the later Floridita booklets, specifically these two (the only date both carry is 1939, found in an article reprinted at the beginning of each): [Floridita-Constante] [Floridita-Cuna] It’s tricky to date both, but I’m wondering if the second is post-Revolution, from either before or right after the Cuban government nationalized Bacardi (the book has a Bacardi ad and one for Cerveza Hatuey, Bacardi-owned). Unlike every other Floridita book I’ve seen, it h…

I’d like to see if we can arrive at a more or less firm chronology of the editions.

For the first three, it’s easy: they appear in the annual English Catalogue of Books, which lists every book published in England.

That gives us this:

After this, Harry moved to Paris and the books stopped being published in England, although they were still edited and printed there. That was not enough to keep them in the ECB. This means that we have to rely on internal evidence, inscriptions, or press mentions to date the rest.

I haven’t been able to examine the fourth, sixth and seventh editions (or, for that matter, the third). I do know that, like the eighth and ninth, the sixth was called not an “edition” but an “impression,” which suggests it had no new material. As for the seventh, I don’t even know if it existed at all; there appears to be no record of it.

Internal and other evidence gives these dates for the remaining editions:

Here, then, are my questions, for which any information at all would be greatly appreciated.

Has anybody seen a copy of the seventh edition/impression?

How many numbered drinks are in the third, fourth, sixth, and seventh editions/impressions?

Does anybody have any information that can date the fourth, sixth, or seventh editions/impressions, or narrow down the dates for the eighth-eleventh and New ones?

The fifth edition has 32 new drinks reflecting Harry’s move to Paris. Were they in the third or fourth editions? Likewise, were the fifteen extra drinks the eighth impression has compared to the fifth edition added in the sixth or seventh?

Was the missing seventh edition/impression actually Barflies and Cocktails? (The fact that they were from different publishers in different countries–Harry self-published BaC in Paris–somewhat militates against this.)

Which edition/impression was the main drinks section of Barflies and Cocktails based on?

What else am I missing?

I tried to answer to this in 2009, by compiling informations from my books, and those of Jeff Masson and Mauro Mahjoub.

Here is what I had (including the printer if necessary)

1st Edition : Dec 1922
292 drinks — Odhams Press, London
(little misspelling on ‘1923’)
Interesting to precise Vermeire was printed first in 1922 (regarding the informations related to the Sidecar).

7th Edition/Impression
never seen so it could definitely be ‘Barflies and Cocktails’,

Formulario del Cocktelero : estimated 1928
Translation of the 5th Edition of the ABC of Mixing Drinks from 1927
322 drinks [same as 4th Edition] — B. Bauza, Barcelona

The last edition [New Edition] is very important edition, because we have the first mention, after 11 edition… for a ‘Bloody Mary’ recipe under the name ‘Red Mary’ for a drink… Strange?

My records pretty much concur with @fernando. I have the 4th Edition in my notes as being maybe 1925–1926, although that Bols ad is hard to argue with.

The 7th edition of ABC does not appear to exist.

There’s a version printed by Harry Portman in Kansas City c. 1933 that supposedly has 324 recipes in a mere 91 pages. I haven’t verified that.

Thank you both for chipping in!

The first edition is definitely from December, 1922–that’s when the English Catalogue of Books lists it as being published, and that’s when the first reviews of it are from, all mentioning it as a new book (the earliest I have is from the Leeds Mercury from December 19). (The agreement between the reviews and the Catalogue mean that we can probably trust the Catalogue when it says Robert Vermiere’s Cocktails: How to Mix Them was published in May, 1922–a good seven months earlier.)

I left out the early edition of Harry’s book specially published for the London vintners, Christopher & Co. This consists of the plates for the first/second edition, with the introduction on bartending replaced by notes on wines and a few interpolated pages of additional drinks. It must be from 1923.

The fourth, fifth and sixth editions could be early 1926, late 1926, and 1927, respectively, if we include the founding year (1575) in Bols’s count of how many years it had been in business. I think this is more likely than 1927/1928, because of Barflies and Cocktails, which really does seem to be the seventh edition.

If a separate seventh edition/impression of Harry’s ABC was published, it is extremely unlikely that it would have evaded all the collectors and booksellers over the years. Harry’s ABC has always been a popular book, and judging by the great many circulating copies, sales must have been fairly extensive.

Barflies and Cocktails was reviewed in the Paris edition of the New York Herald in September, 1927, so that gives us a firm date. (I get the equivalent of 327 numbered drinks, lumping the “Various Continental Beverages” together as one like the other editions do; nine drinks are added to the 5th edition and seven subtracted from it, by my count; I will count again, though–if Martin says something, I wouldn’t bet against it).

Thanks for adding the Formulario del cocktelero, Fernando–I knew there was a Spanish edition, but I don’t have access to a copy and couldn’t remember when it was from. I’ve never seen a copy of the Harry Portman edition; if Virginia Tech and UC Davis indeed have copies, as Worldcat says, I’d be a little surprised.

I got to 411 numbered drinks in the New Edition by counting the ones shoehorned in as x-“bis” and “ter.”

The Red Mary has to be balanced against the College Inn cocktail (tomato juice, spices and sherry) in the 10th edition (Chicago’s College Inn popularized the bottled Tomato Juice Cocktail, with the juice plus spices, in 1927, but there was also a popular College Inn bar in Paris), and this ad from the paris Edition of the New York Herald, January 3, 1931:

For what it’s worth, Harry’s Bar doesn’t appear to have been credited with the Bloody Mary until the 1967, and that was due to Petiot saying he came up with it there, not a statement from the bar itself. Eventually it embraced the claim.

Now to chart precisely what was added and when.

Another bit of evidence for considering Barflies and Cocktails as the seventh edition of Harry’s ABC, from Arthur Moss’s “Around the Town” column the Paris edition of the New York Herald, November 1, 1926, p. 5: 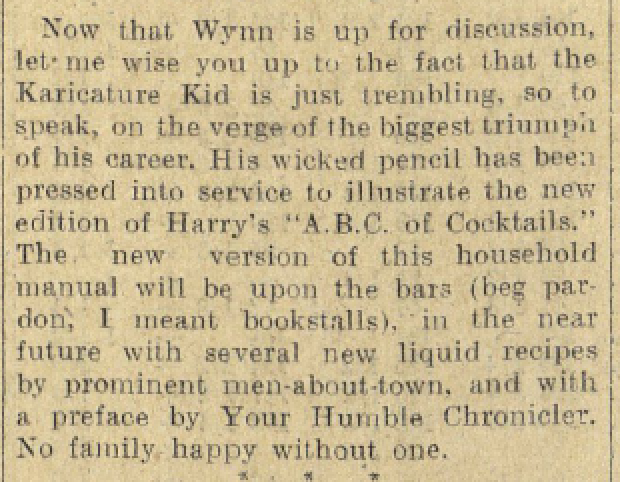 Now to chart precisely what was added and when.

Alas, if it weren’t for the CK relocation, this would already be done. It’s been sitting on my to-do list. Still need to finish up doing the same thing with Haimo.

Thanks a lot Fernando (and David off course) I was seriously scratching my head trying to figure when that “Red Mary” recipe was published. This thing about the popularity of the Bloody Mary seems to be another succesful MKT ploy from vodka brands during the early 50’s. Not downplaying the relevance of the BM, but previous to that period seems to be only a scant couple mentions of it (called like that or by its other name) and apparently was odd enough to be highlighted only by the fact is 1) a hangover cure and 2) a vodka and tomato juice mix. From the mid-fifties forward the BM seems to be everywhere, coinciding with heavy advertising from vodka brands.
Saludos!

Sorry to revive an old topic, but I’m trying to resolve an oddity in the Harry’s 7th edition, “Barflies and Cocktails.”

The description of the Scofflaw cocktail describes its creation with a quote from the Chicago Tribune, January 27th, 1924:

“Hardly has Boston added to the Gaiety of Nations by adding to Webster’s Dictionary the opprobrious term of “scoff-law” to
indicate the chap who indicts the bootlegger, when Paris
comes back with a “wet answer” - Jock, the genial bartender of Harry’s New York Bar, yesterday invented the
Scoff-law Cocktail, and it has already become exceedingly
popular among American prohibition dodgers.”

I have gone through all 154 pages of the Jan. 27, 1924 issue of the Chicago Tribune (it was the Sunday edition), and been unable to find this article. It’s possible that I just missed it, or that it appeared in an evening edition that didn’t get digitized. But maybe it was a mistake or a fabrication? Can anyone confirm its existence?

Also, I found a Jan. 21 article describing the Scofflaw cocktail, and attributing it not to Harry, but to Maxim’s bar in Paris: 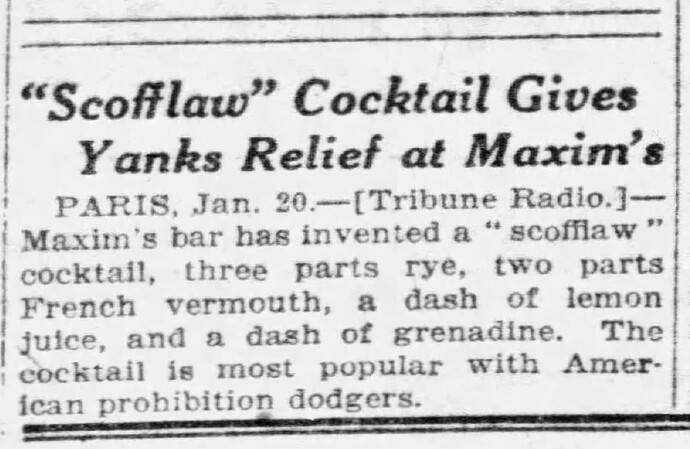 So perhaps it started at Maxim’s, and spread to Harry’s? It was definitely at Harry’s by November, when a widely-published story notes that Harry’s New York Bar had a sign announcing “Try our Scofflaw Cocktail!”

Sorry to revive an old topic 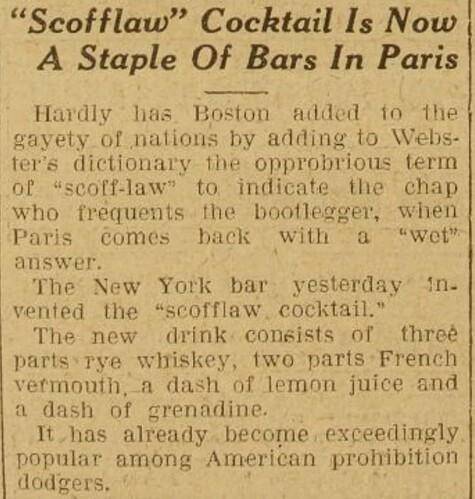 Note that Harry–aka “Jock”–thoughtfully wrote himself into the article when he transcribed it.

I think the Maxim’s attribution is a mistake, since that article is clearly derived from the Paris Tribune one, apparently via a radio broadcast; somebody seems to have mis-heard something.

Well, that explains why I couldn’t find it. Thanks, David - I really appreciate you tracking it down in a different newspaper and a different day!