I’m trying to untangle the dating of the later Floridita booklets, specifically these two (the only date both carry is 1939, found in an article reprinted at the beginning of each): 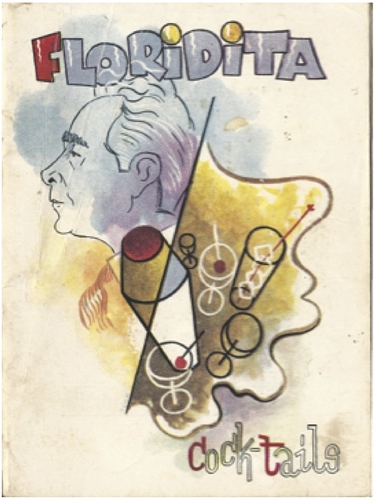 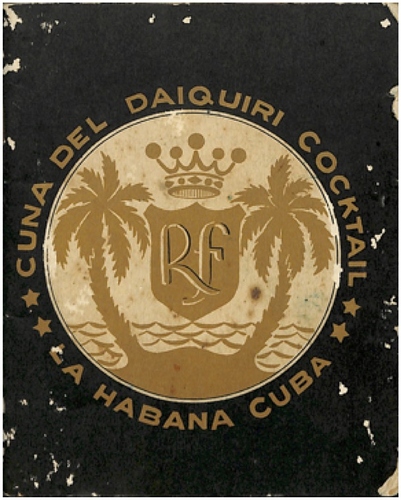 It’s tricky to date both, but I’m wondering if the second is post-Revolution, from either before or right after the Cuban government nationalized Bacardi (the book has a Bacardi ad and one for Cerveza Hatuey, Bacardi-owned). Unlike every other Floridita book I’ve seen, it has no ads for non-Cuban liquor brands.

To complicate things, I see that there’s also this version, of which I’ve never seen a copy. Is this in the Cocktail Kingdom library? Has anyone seen it? 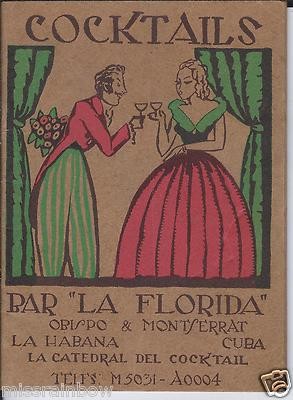 Beginning with the bottom one, that’s the 1933 edition, and yes, we have it in the library. Already bilingual.

We are a bit confused about the other two. @francois or @fernando might be able to help.

The cover suggests it’s after Constante died. The Bacardi one strikes us as a derivative printing for Bacardi.

Good to know about the last one–I saw it listed as 1950s and figured I was seriously out of the loop. A special Bacardi printing for the Cuna del Daiquiri version is an option I had not considered. That’s a good suggestion. But it’s interesting that all the names to whom the cocktails had been dedicated are missing, as if they were personae non gratae.
As for the one with Constante on the cover, if he had recently died I would have expected at least a black-bordered page dedicated to him; something like that.

My hunch is that the second one is early 50’s and the first one, with Constante’s portrait, is mid 50’s, published after the great man’s death. I believe there’s a third one in the (probably) 50’s series in the Cocktail Kingdom Library.

I could, of course, be completely wrong. I’m certain, though, that the second one is a Bacardi promotional. I’ve done recipe by recipe comparison and the main difference is that the second features about ten extra Bacardi drinks that are clearly marketing drinks (Bacardi Mint Julep, Bacardi Mojito on top of the regular Mojito, etc). The dedicatees have all disappeared but it could be precisely because it was a promotional edition, and not a regular one for friends and regulars. This being said, cocktails named after people have also been expunged – as was the ‘Vermouth Colonial Style’, so who knows…

For what it’s worth, Fernando dated the first one to early 50’s and the second to 1956, but I don’t know on what basis.

We have two specimens of the one with the profile portrait—I’ll have to compare them carefully next week.

My hunch for the first is 1950-52, based on the ads (e.g., George VI is still the king in the Vat 69 ad and the Bacardi ad is closer to the 1940s style–in fact, all of the ads are, without the increasing abstraction characteristic of 1950s commercial art). As for the Cuna del Daiquiri one, what you say makes sense. Judging by the Bacardi ad, it’s from the mid 1950s.

Yes, it’s the same Bacardi ad in both volumes, actually.

The post-nationalisation hypothesis is something I hadn’t though about. Bacardi was nationalised in 1960 and, according to Gjelten, the Cuban government dropped all intents to distribute the stuff in 1964. Floridita was not nationalised until 1965.

Hmmm. Here’s the Bacardi ad from the Constante-cover version I’ve got access to: 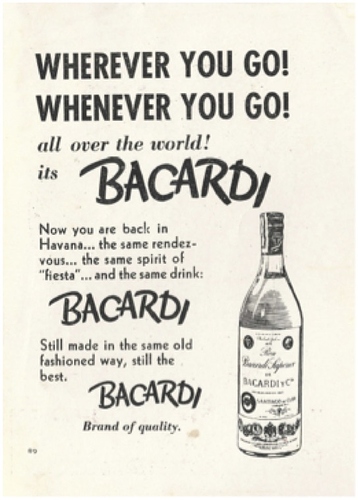 And here’s the one from the Cuna del Daiquiri version:

That’s what I was thinking about nationalization. Also, the words “Cuna del Daiquiri” were added in steel on the ice chests behind the bar sometime around the late 1950s, from what I can tell (I could be wrong). That seems to tie in with the cover.

The expression “Cuna del Daiquiri”, although less prominently, features in the Constante-faced volume too.

True. I was considering the design. The phrase also appears in a couple of the earlier editions, at least in English (in Spanish it’s a Cathedral, not a Cradle). But I recall hearing that the letters in the bar came later. I’ll look into it.

Thank you François for remembering the dates of 1950 and 1956, I don’t remember where I found that few years ago…

About the ‘Cuña del Daiquiri’ one. In 2003, I didn’t had a later one so I though the date 1939 was right (so I dated the Negrone/Negroni that year… wich I realized later is was wrong, when I saw the ‘Constante’ one, also dated 1939, but impossible as color printing made it’s appearance during the 1950s.

Anyway it would be good to confirm the date of death of the author of that quote with the year changing up to 1939… I thought if was the year the journalist died. But I found in a book L.F.M (Lorenzo Frau Marsal) died in La Havana in 1947 (and was born in Barcelona in 1886). Strange…

So I’m wrong about the letters behind the bar, judging from this photo from the mid 1950s: 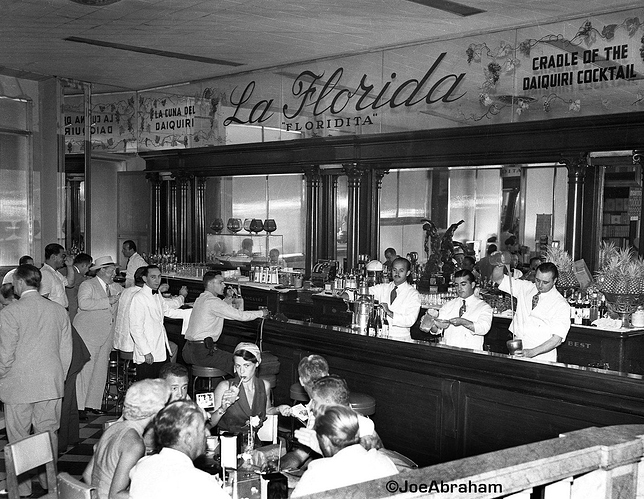 After digging into this a little more, I think the booklet with Constante on the cover has to be 1952 and the other one a Bacardi promo version from the mid to late 1950s, as discussed.

The chief determining factor for the first one is the presence of the “Mr. John Ringling North” highball on p. 50. North was the director of the Ringling Bros Barnum & Bailey Circus, which beginning in December, 1949, began making yearly visits to Cuba. However, as this January, 1952 bit from Robert Sylvester’s “Dream Street Beat” column in the New York Daily News (January 20, sec. 2 p. 7) suggests, the dcrink most likely dates from 1952:

The Vat 69 ad mentioned above adds the not later than 1952 limit, more or less: George VI died in February, 1952; by April, anyway, Vat 69 was replacing this logo, as found in the Floridita booklet: 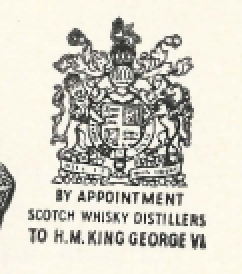 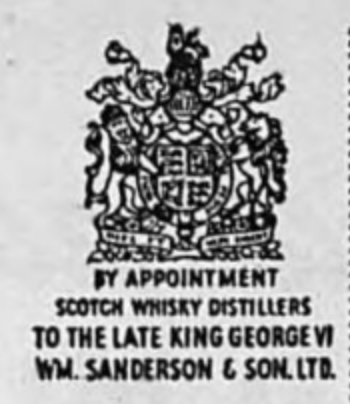 Even allowing a little time for things to reach Cuba, that doesn’t put the date of the booklet much past late 1952.

The other booklet is more difficult. All we can say is that it is after the 1952 one. It removes all of the names of the dedicatees from the drinks found in the 1952 one (and previous versions), and almost all of the drinks named after Cubans (some 14 drinks). In return, it adds seven simple Bacardi drinks, amost all of them Bacardi versions of classics such as the Alexander, the Manhattan and the Julep. Perhaps they would have had to get permission to use people’s names in a promotional booklet.

Anyway, that’s my best shot at this rather thorny problem.

Thank you! I do enjoy this sort of thing, God help me.

Constante died in late 1952, but had been ill for months and barely appeared at the bar anymore. Maybe his (first) appearance on the cover was indeed a tribute.

I think that’s the best hypothesis.

The two specimens we have at CK are identical and appear identical to Fernando’s/EUVS. Perhaps they only did one big run of these (the 1952)?

I talked to Jorge Ribalaigua, Constante’s son, for an unrelated matter, but I asked… For what it’s worth, he has the black-covered book in his personal collection. This is a family relic and he says it was pre-nationalization, without the shadow of a doubt.

Good to know. Although we don’t have absolute dates for these booklets, I think we can consider their order closed and can date them now within a couple of years. 1951-1952 for the one with Constante on the cover, and something like 1954-1958 for the black-cover one. That’s useful.