Lies and mysteries: A Book of Famous Old New Orleans Recipes Used in the South

We have a number of these booklets in our collection—they aren’t that uncommon and probably remained in print for many years—but only one of ours sports a copyright date, 1900, which appears on both the front and back covers: 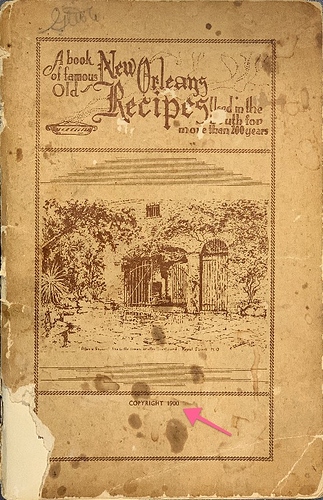 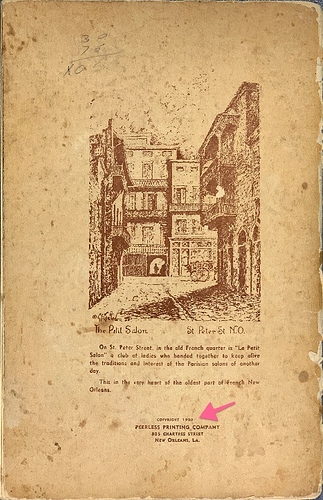 There’s no author credited, but a Peerless Printing Company at 305 Chartres St is referenced. 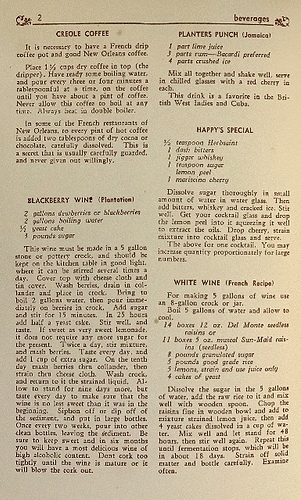 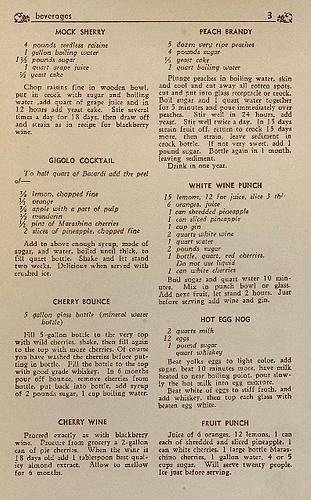 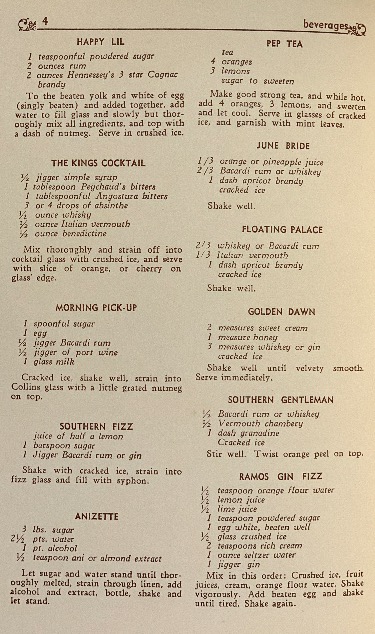 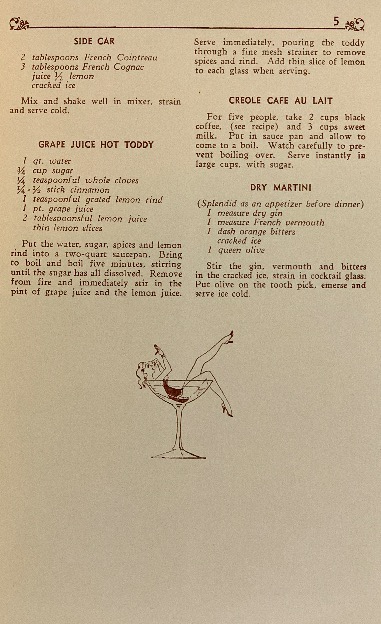 Without even dwelling on the odder drinks, a Side Car in 1900?

Unfortunately, there are plenty of people out there who will get their hands on something like this booklet and take that stated copyright date at face value. If you take a few minutes with Google, you should turn up at least one example on the web where someone has done exactly that. Some might even be gullible enough to take the subtitle “Used in the South for more than 200 years” and conclude that these drinks therefore date to the year of our lord 1700, around the Orleans Parish. [The rest of the booklet contains cooking recipes and perhaps some of them are, indeed 200 years old—I haven’t bothered to look.]

Bottom line: this booklet was printed almost assuredly after Prohibition, but no earlier the 1920s. Most likely, it was printed in the 1930s and compiled by George L. Mayer, a New Orleans businessman, for the local souvenir trade. One of the ways we can put this together is this court record from 1939. That, and the fact we have a pretty good idea whence came the Side car.

We also know that Peerless Printing was involved with early editions of another book, Gourmet’s Guide to New Orleans, that later moved to a different printer. (We have a few later editions of this in the collection, too, but not one printed by Mayer.)

One might conjecture that once Mayer lost the printing gig for Natalie Scott and Caroline Merrick Jones’ book around 1934, he decided to produce his own similar book. And then he decided to lie about when it was published.

As I mentioned, we have several more copies of Mayer’s book that lack any copyright year. (The year was removed, so it just says “Copyright”.) These later editions are bound differently (plastic spiral-type) and have a few revisions to page five, removing a couple recipes and adding the Mint Julep, Summer Snow and the Pink Elephant. 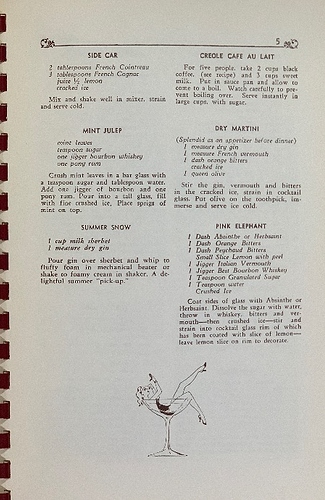 As you can probably see in the picture, the typography is a little heavier, suggesting this is just modification of an old plate to create a “new edition” at minimal cost. (Lots of old cocktail books show such modifications.)

Isn’t it also possible that a book with multiple editions will sometimes retain the original copyright page through subsequent editions (to save money on resetting it), leading some to think that later addenda are older than they were? I feel that has come up before as well. But the publisher straight-up lying about the date is another issue.

Yeah, in fact that goes both ways.

Some books undergo revisions without acknowledging it. They might have some extra pages tacked on in back, or there might be some manual changes to a plate or two, but maybe they don’t want to mess with the design of the existing copyright page or they just can’t be bothered by details. It’s also not that uncommon in older books to drop the copyright date entirely—as above or as on the Ronrico booklets—sometimes by simply removing the year from the existing plate.

One example is the original Savoy Cocktail Book, which has two primary editions before it was completely redesigned: the 1930 and the 1933 “new and expanded”. But there was a reprint in 1930 and two reprints in 1931 and some changes were made during those reprints that were not acknowledged: the year 1930 on the title page remained the only date. The first change—which may have only lasted through one reprint—is that they tipped in a strip of paper with the Bacardi Cocktail on it. We also have a strange interim specimen that has an extra appended page of additional recipes that’s almost a rough draft for the 1933 edition. The 1933 edition is just the 1930 edition with a new cover design, an actual list of printings and edition dates added to the back of the dedication page, and six pages appended at the back with additional recipes (including that Bacardi Cocktail recipe). Given the complexity of the Savoy’s layout, it’s no wonder that nobody was keen to redo it just to integrate 27 more recipes into the flow. Indeed, the title page was only modified to strip the “1930” from the bottom (an additional “1930” survives in the unchanged triangular block of text) 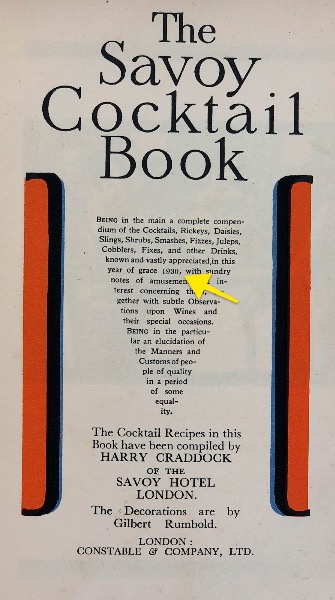 Meanwhile, other books are explicitly editioned without any substantive changes, which is a pain, because you waste time comparing them and can’t find anything. For example, this sort of happened with Ted Saucier’s book: there are in fact only two distinct editions, content wise, but other changes were made across different printings.

Another annoying variant are the ones that are editioned, but without specifying years! Harry’s ABC of Mixing Cocktails is a particularly maddening example. It went through at least fourteen editions, almost all of which have changes, only some of which are numbered, and there are at least five of which we still don’t know the exact year for!

Some of those recipes seem like Prohibition ones: the white wine, the mock sherry, the peach brandy, and it was common enough, if I recall correctly, for Prohibition-era drink books to use a fake copyright date as a way of deflecting unwelcome attention. But then there are the recipes with Herbsaint, which was as far as I know not a bootleg spirit. Odd.

Well reasoned analysis. I recall you showing me this volume during one of my visits to the library. My approach with old cocktail books is always to proceed with skepticism and mistrust until proven otherwise.