Sometimes we experience great difficulty dating materials from the past. The Mixtro’s Guides published by Ronrico in the 1950s, and perhaps before and after, are intriguing examples. 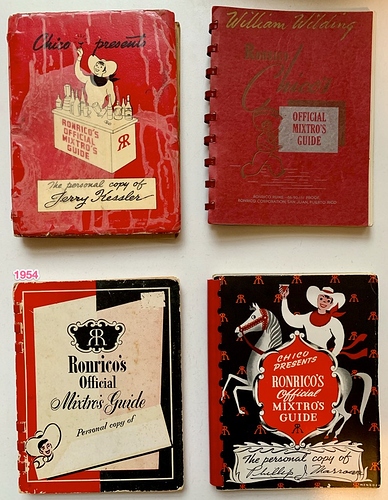 Of these four, only the one in the lower left corner states a publication year: 1954. The other three are unusually difficult to date.

The 1954 edition is distinctive, because, in addition to the publication year, its pages have additional spot color borders. This is also the only one of the four editions we have that is advertising the rums with an age statement (“Ronrico Rum Now 4 Years Old”). The one in the lower right contains no product information whatsoever, other than the recipes that specify the Ronrico rum by label color (white, gold, red or purple). The two top guides contain promotional pages about the products, but also only discuss them with regard to label color (no mention of age statement).

The edition in the upper right corner is distinctive for not having the “personal copy of” space on the cover, and instead offering this tear-out registration card, with the promise of “future inserts”. (Were any additional pages ever delivered to registrants?) 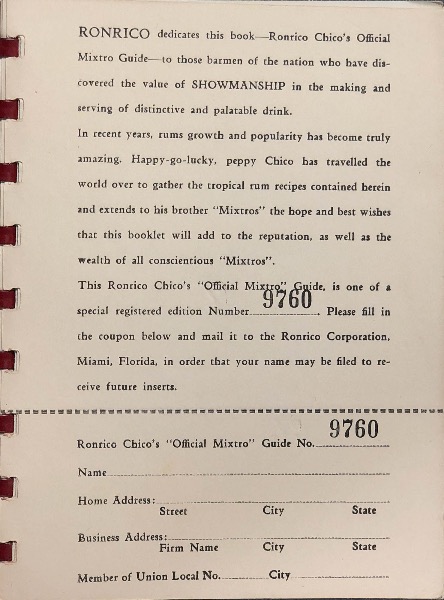 The two bottom editions have plastic binding. The two top have metal. None have the same binding. The upper right edition specifically uses “CERCLA” binding from General Binding Corp (Chicago)—and that’s how desperate I’ve gotten trying to narrow down the publication dates for these booklets!

Comparing the contents hasn’t produced any narrative I feel all that confident about. The one on the lower right could be interpreted as being a slightly shoddy superset of the one on the lower left: it omits 14 recipes in the former, while adding 29—all obscure. Four of the recipes omitted by the latter were on a page that was outright replaced with a full-page presentation for Ronrico Coconga, which Ronrico was pushing hard at some point. The top two are missing a smattering of recipes from the bottom two, while adding nine or so recipes, most of which appeared in Ronrico pamphlets in the 1940s but were omitted in the 1954 edition. Recipe order is most peculiarly jumbled across all the editions.

Only the lower right and upper left editions make use of the “Chico Presents” element of the title.

So, perhaps the order is lower left (1954), lower right, upper left, upper right. Or maybe not? If anyone has in information, please share!

I’ve just acquired the one on the upper right (red, gold and silver, with no white). I don’t have the other three for comparison, but if you think most of these books are from the 50s, I’d place this one as the oldest. Probably from the 40s, if not earlier, because of the fourth sentence in the essay “Versatility of Rum,” which begins, “Since Repeal, the mixing quality of Ronrico has become so established . . .” I don’t think you’d find Repeal mentioned in a book from the 40s, and you certainly wouldn’t find it in something published in the 1950s, when the reader might well have been BORN after Repeal. I also think the metal binding and the graphics attest to an earlier date. The “Ronrico Chico” is not well drawn, the face is not as defined as in the later versions, and he hasn’t yet been molded into the “sexy cowboy” figure that would have been popular in the 1950s
Just one woman’s opinion!

Interesting point about the “Since repeal,” verbiage. I’ll check that against the other specimens. I did a little research into the metal binding, but it was inconclusive because all four of these books seem to come from a pretty narrow time span.

I totally buy your working hypothesis.

Moreover, the RonRico material from the 1940 How & When is all present in that upper right specimen, and the same cannot be said for any other RonRico material we have. Moreover, this RonRico booklet even has a “Tropical Specialties” section at the back (similar to How & When)! So, I’m gonna call the upper right booklet as being from 1940, too, and I’m going to call it as the source of the recipes in Marco’s How & When.

In 1941, RonRico published a dated pamphlet called The Rum Connoisseur; this has fewer drinks, but adds the Hot Zombie, Mary Pickford, RonRico Flip and a few odds and ends, all of which appear in the upper left booklet, so I’m going to call the upper left booklet as 1941 or 1942—roughly contemporaneous with that first edition Connoisseur pamphlet.

Furthermore, a second, dated edition of The Rum Connoisseur appears in 1946. In it, RonRico has begun specially pushing a drink called Coconga featuring their Coconga Coconut Mix; that drink also appears in a slightly different form in the upper left (1941/1942) booklet as the RonRico Coconga. The updated Coconga appears in all the remaining RonRico materials we have, making 1946 probably the latest that the upper left specimen could come from.

In terms of dated materials, that leaves two items: the 1953 Make ’em with RonRico pamphlet, which is a lot like a stripped down The Rum Connoisseur pamphlet, and the 1954 booklet in the lower left. Unsurprisingly, these two are closely related in content.

That just leaves the lower right specimen, which is the odd man out. It feels like the newest, it has slightly more recipes than the 1954, but it has a rather odd mix of recipes spanning all the RonRico materials we have. It is not a member of any clear progression. It might precede 1953, or post-date 1954. I’m not sure we really care that much, since it contains little or nothing new.

WELL DONE! You get an A in Comp. Lit. I was only auditing this class.

A last note on this: My “Official Mixtro” Guide Number is 14045, so they must have been pretty popular (unless they started numbering with 9000, which is quite possible).

And a last, last note–my copy is available. I’m a cookbook dealer.